(CNN) -- High winds and heavy seas capsized a boat filled with African migrants heading for Europe off the coast of Libya Monday -- with more than 200 feared dead, the International Organization for Migration in Geneva, Switzerland, said Tuesday. 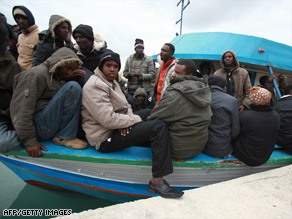 A group of 227 migrants sits on a fishing vessel in Malta last month after arriving from Somalia.

Jemini Pandya, IOM spokeswoman, said a boat carrying 250 people capsized north of the Libyan coast, with at least 20 confirmed dead and 23 rescued. Another boat with around 350 migrants was rescued.

She said the rescued migrants were taken to two centers in the Libyan city of Tripoli. They included Egyptians, Somalis, Ghanians, Nigerians, Tunisians, Eritreans, Algerians, and Moroccans.

There were also passengers from Asia -- Bangladeshis, Syrians, Indians, and Pakistanis, she said. She said there may be two other vessels in the Mediterranean carrying migrants.

The initial reports that two vessels capsized proved to be incorrect, Pandya said.

Watch as migrants are feared drowned »

The migrants were believed to be headed for the Italian island of Lampedusa, where 37,000 landed last year, according to IOM spokesman Jean-Philippe Chauzy, who said many African migrants converge on Libya en route to Europe.

Italian coast guards said an Italian tugboat working for an offshore oil companies in the Libyan seas picked up 350 people on Sunday and carried them to Libya with the help of the Italian military.

The U.N. refugee agency, aware of the reports, said they came at the "beginning of the smuggling season in the Mediterranean."

The U.N. High Commissioner for Refugees said details remain sketchy about what happened, but one boat among several vessels leaving Libya for Italy went down and hundreds are reported missing. It said the mishap occurred near the Libyan coast. It said some Egyptian nationals were rescued and bodies were recovered and that those aboard included Africans from the northern and the sub-Saharan regions.

High Commissioner Antonio Guterres on Tuesday said that the tragedy reflects the desperation of people to escape poverty and persecution.

"This tragic incident illustrates, once again, the dangers faced by people caught in mixed irregular movements of migrants and refugees in the Mediterranean and elsewhere which every year cost thousands of lives," the U.N. agency said.