(CNN) -- Sudanese President Omar al-Bashir landed in Qatar on Sunday for an Arab League summit, a move that could put him at risk of arrest on war crimes charges leveled by a U.N. tribunal. 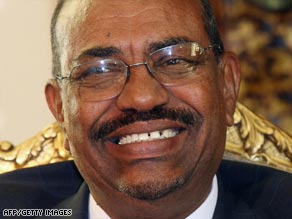 Omar al-Bashir is the subject of an ICC arrest warrant over allaged war crimes in Darfur.

Earlier this weekend, al-Thani criticized the timing of the arrest warrant issued in early March by the International Criminal Court, arguing it has undercut his government's efforts to resolve the long-running conflict in Sudan's Darfur region.

"We believe that peace and justice should go hand in hand to settle the conflict in Darfur, or for that matter, any other conflict," al-Thani told Arab League foreign ministers Saturday in remarks carried by the Qatar News Agency. "But we also believe that justice cannot be reached in the absence of peace."

The March 4 arrest warrant is the first issued for a sitting head of state by the world's only permanent war crimes tribunal, based at The Hague in the Netherlands. But the ICC has no arrest powers of its own, and depends on its 106 member states to take suspects into custody. Qatar is not a member of the tribunal.

Sudan refuses to recognize the legitimacy of the ICC, and has made no efforts to hand over two other officials indicted by the court. Al-Bashir has called the charges an attempt by Western powers to recolonize Sudan.

The court accuses al-Bashir of complicity in war crimes and crimes against humanity in his government's campaign against rebels in Darfur, in western Sudan.

The United Nations estimates that 300,000 people have been killed and 2.5 million have been forced to flee their homes because of the conflict.

Qatar had been mediating talks between Sudanese officials and representatives of one of the rebel factions, who signed a confidence-building agreement in February.