(CNN) -- Around 1,000 people accused of being witches in Gambia have been locked up in secret detention centers and forced to drink a dangerous hallucinogenic potion, according to human rights organization Amnesty International. 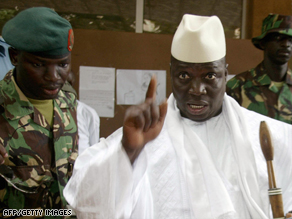 At least two people have died after drinking the liquid while many more have suffered serious kidney problems. Others suffered injuries as a result of being severely beaten, Amnesty said Wednesday as it called on authorities to "put an immediate stop to the witch-hunting campaign."

Amnesty claimed Gambian President Yahya Jammeh had invited "witch doctors" -- believed to be from neighboring Guinea -- to the West African nation following the death of his aunt.

Jammeh, a former soldier who has ruled Gambia since leading a military coup in 1994, is reported to believe that witchcraft was involved in her death, according to Amnesty.

CNN contacted State House, the presidential residence in the Gambian capital, Banjul, but no-one was available to comment. "I have no information," a woman told CNN.

Victims and their relatives tell Amnesty that "witch doctors" accompanied by police, soldiers and security forces have been visiting villages and seizing people accused of being witches by force and at gunpoint.

Members of Jammeh's personal guard, known as "green boys," are also alleged to have taken part in the campaign.

In the most recent incident on March 9, 300 people from the village of Sintet were forced to go to a farm owned by Jammehk, Amnesty said.

One of those seized said he had been held for five days and forced to drink "dirty water" containing poisonous herbs which caused instant diarrhoea and vomiting.

"I experienced and witnessed such abuse and humiliation. I cannot believe that this type of treatment is taking place in Gambia. It is from the dark ages," the victim told Amnesty.

Hundreds of Gambians have also fled to neighboring Senegal following attacks on their villages, according to Amnesty.

It also said it was concerned that a prominent opposition lawmaker, Halifa Sallah, who was arrested earlier this month after investigating the witchcraft claims for a newspaper, could be at risk of being tortured while in custody.

Halifa, a former presidential candidate, heads the People's Democratic Organization of Independence and Socialism and is minority leader in Gambia's national assembly.