HARARE, Zimbabwe (CNN) -- Prime Minister Morgan Tsvangirai of Zimbabwe said Monday that he does not believe foul play was involved in a car wreck that killed his wife. 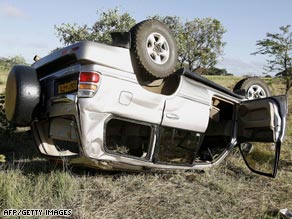 The vehicle the couple were traveling in was left overturned off the highway.

"When something like that happens there is speculation, but I want to assure you if it was foul play, it is one in a thousand," he said Monday. "It was an accident that took her life."

Tsvangirai's comments came amid widespread speculation that the wreck was caused by his political opponents aligned with President Robert Mugabe.

Tsvangirai's political party, the Movement for Democratic Change, has said the crash was an assassination attempt. It has called for an independent inquiry.

Zimbabwe's new prime minister was hurt in the wreck and returned home Monday from neighboring Botswana.

"Life has to go on and I'm certain that if she was here she would liked life to go on," he said. "It will be difficult to fill the gap left by her."

Tsvangirai has long been a leading opposition figure in Zimbabwe, but he joined a coalition government with Mugabe last month. That seemed to resolve an impasse created by a disputed presidential election between Mugabe and Tsvangirai last year.

Tsvangirai received the most votes in the March 2008 election, but he fell short of the 50 percent required to avoid a runoff. He withdrew as a candidate in the runoff, citing political violence and intimidation targeting his supporters.

Negotiations between the two sides culminated in the power-sharing agreement that was implemented just weeks ago.

Questions about the wreck surfaced shortly after it happened Friday on a busy two-lane highway between Tsvangirai's hometown of Buhera and the capital city of Harare.

On Saturday, members of Tsvangirai's political party, the Movement for Democratic Change, told CNN that Tsvangirai believed that the driver of the truck that struck his car deliberately drove toward him in an effort to take his life.

The party's secretary-general, Tendai Biti, said police should have provided better security for Tsvangirai. The wreck might not have happened, he said, if a police escort been on hand.

"I'm skeptical about any motor vehicle accident in Zimbabwe involving an opposition figure," said McDonald, who was ambassador to Zimbabwe from 1997 to 2001.

"President Mugabe has a history of strange car accidents when someone, lo and behold, dies -- it's sort of his M.O. of how they get rid of people they don't like."

McDonald, however, was quick to add that traffic accidents are common in Zimbabwe. The highway on which Tsvangirai was traveling is a two-lane road on which tractor-trailers are common, he said. Vehicles in the country are often in bad shape and many drivers are inexperienced, he said.