UNITED NATIONS (CNN) -- Sudan's ambassador to the United Nations on Friday defended his nation's decision to expel 16 nongovernment aid organizations, charging they were "messing up everything," "spoiling," and "destabilizing" his country. 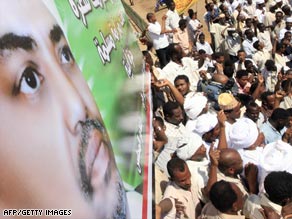 Abdalmahmood Abdalhaleem Mohamad said the government took action because the North African nation has evidence the suspended nongovernment organizations repeatedly acted outside their humanitarian mandate and were working with the International Criminal Court in its investigation into the conflict in the Darfur region of Sudan.

When asked to produce evidence of nongovernment organization complicity with the International Criminal Court, the ambassador failed to produce verbal or visual documentation, but told members of the U.N. press corps to come to his office to see it.

On Wednesday, judges with The Hague-based International Criminal Court issued an arrest warrant for Sudan's president, Omar al-Bashir, on charges of war crimes and crimes against humanity for his role in the Darfur war.

That office said 85 nongovernment organizations are working in Darfur, but the agencies whose work has been suspended -- including Doctors Without Borders, Oxfam and Mercy Corps -- account for more than half the aid delivered.

The United Nations also estimates that at least 1.1 million people will be left without food, 1.5 million without health care, and 1 million without drinkable water as a result of the Sudanese government's decision.

U.N. Secretary-General Ban Ki-Moon said Thursday that Sudan's decision will cause "irrevocable damage" to the aid operations in Darfur. At least 4.7 million people in Darfur rely on aid, he said.

The U.S. ambassador to the United Nations, Susan Rice, called the Sudanese decision "reckless" and "callous." She added that the government of Sudan has now chosen greater international isolation.

Sudan will be back on the U.N. docket next week when a high-level Arab League and African Union delegation will come to New York to urge the United Nations to "do something" about the International Criminal Court's decision, according to Sudan's ambassador.

Under Article 16 of the Rome Statute, which formed the International Criminal Court, the U.N. Security Council could vote for a one-year suspension of the arrest warrant. But key Western members of the council, including France and Britain, would likely veto any push for such a move.

Neither Sudan nor the United States is a signatory to the International Criminal Court.