WASHINGTON (CNN) -- The U.S. Navy could hand over seven suspected pirates held aboard a U.S. ship to Kenyan authorities for prosecution as early as this week, according to U.S. military officials. 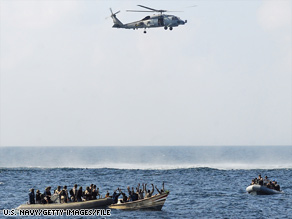 The U.S. Navy apprehends suspected pirates February 12 in the Gulf of Arden.

Pentagon officials said the transfer of the pirates to Kenyan authority was close. The suspects had been moved to a smaller U.S. ship that would move them to a Kenyan port to be handed over, they said.

The handover would be the first since the United States and Kenya struck an agreement to move suspected pirates caught off Africa's east coast to Kenya for prosecution.

The suspected pirates have been held by the United States since February 11, when they were captured off the coast of Somalia after attempting to take over a Marshall Islands-flagged tanker, Polaris.

The tanker reported that men aboard a small skiff were attempting to board the ship using ladders, but its crew removed the ladders before the would-be hijackers could get aboard, the Navy said.

A Navy ship found and boarded the pirate skiff, and the tanker's crew identified the men aboard the skiff as their would-be hijackers.

The Navy has been holding the suspects in a makeshift detention facility aboard the USS Lewis and Clark until the U.S. and Kenyan governments worked out the final details of how to move pirates detained by the United States into Kenyan authority, officials said.

The Navy had been holding 16 suspected pirates, but earlier this week it announced the release of nine of the detainees "because of a lack of evidence in their case," it said.

Those nine suspects had been detained by the Navy on February 12 after the captain of an Indian-flagged ship, Premdivya, broadcast a distress call to all ships in the area that it had come under attack by a small boat.

The nine were brought into Somali waters and then handed over to the Puntland coast guard. Puntland is the self-proclaimed Somali state that includes the point of the Horn of Africa.

All About Pirates • Kenya • Africa