Sudan soldier: 'They told me to kill, to rape children'

As the International Criminal Court issues a landmark warrant for the arrest of Sudanese President Omar Hassan al-Bashir over war crimes in Darfur, CNN's Nic Robertson interviews a man who was told to rape and kill children.

(CNN) -- I wanted to believe the man in front of me wasn't a rapist. I knew he was a former Sudanese soldier, I knew he wanted to talk about rape in Darfur. A humanitarian group working on Darfur issues had introduced him to us. They told us his testimony was important to hear. 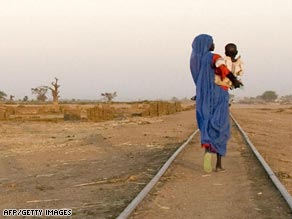 A woman left homeless by conflict in Darfur walks along railway tracks.

Last year in Darfur aid workers told me children as young as five were being raped in the huge displacement camps that are home to several million Darfuris. In some camps, they told me, rape had become so common that as many as 20 babies a month born from rape were being abandoned.

As I sat inches from Adam --not his real name -- I feared the revulsion I knew I would feel at my own questions as I asked about rape and his involvement. I have interviewed rape survivors in Darfur. I have two daughters. I am a human being with a conscience. It would be hard to listen to his replies.

He told me he was conscripted by force in to the Sudanese army in the summer of 2002. He thought he was being taken for six months' national service and then would be released.

The conversation was slow going at first. We were both holding off from delving into the sordid details he'd come to discuss. His answers were short, he told me he got no pay from the army, only food and drink.

He said he was rounded up in an army truck from a market in Darfur and trained to kill. He said he was armed with Kalashnikovs and told to "shoot targets."

Then, he says, his officers told him "we will be taken to a patrol and then soon after that we were asked to join other people to go and burn and kill people".

That's when he says he realized he wasn't getting national service training, that in fact, he was being forced into war against his will, with his own people. "They are black," he told me, noting the difference between the lighter skinned rulers of Sudan and the darker farmers of Darfur. "I am black," he said, "this shouldn't be happening."

But, he said, worse than being told to kill his own people, was that if he tried to resist, he himself would be killed. "The order is that the soldiers at the front, and there are some people who are watching you from behind, if you try to escape or do anything you will get shot. The order is that we go to the village, burn it and kill the people."

It felt as Adam was beginning to open up a little -- not easy, given the topic, and the lights and cameras all around us. He was beginning to talk a bit more, answer questions with more than one or two words. But it was following a pattern: I'd have to lead the way. We were both waiting for the inevitable. How he came to know of rape in Darfur.

And that's when he said it.

Watch warrant being issued for president »

He brought up the rape by himself. He was talking through a translator but his voice was quiet. I thought I heard anger, heard him slow and his voice drop: "I had no choice," he said "but I will say that I didn't kill anybody but the raping of the small children, it was bad" I knew this was going to be difficult and now it had begun.

What happens with the children, I asked. "They cry out," he answered. "And what happens when they cry out?" "Two persons will capture her while she is crying and another raping her, then they leave her there," came his reply.

Silence. "What do I ask now?" I thought. Be forensic. Get the story. This is important testimony, I reminded myself.

And so we continued, Adam describing in detail how soldiers raped girls as young as 12. How officers ordered them to do this to make people flee their villages, run away and never come back. Through all of this, Adam didn't once mention whether he actually had been directly involved in the raping.

He said he tried to desert the army as soon as he could, but was caught and tortured. He showed me the scars where he said he was tied down beneath a tree and officers set fire to tires above him, dripping burning rubber on his body.

Eventually, he said, he did get away, went to his sisters, tried joining the rebels to fight the army. But even there, his troubles were far from over. Incredibly, he said, the rebels didn't trust him; he was kept at their camp and only escaped when it was bombed by the army.

The end of his story, but we weren't really done. One more question.

Had he been forced to rape children?

"Yes I did, they were government orders," came his reply.

I want to be sure I understand him. "So you didn't actually penetrate the girls?" I ask. No, he says, "because I had no feeling for it, my penis didn't actually wake up, so there was no actual penetration," he replied.

There were other people in the room, the translator, a cameraman, our producer Jonathan Wald, but I had forgotten they were there. My thoughts were entirely locked on Adam.

What more could I ask? I was emotionally drained. There was no way of knowing whether he was telling me the truth. Only in the measure of his voice was there a clue.

Here, sitting on an office chair, thousands of miles away from Darfur, the memories come flooding back. The many, traumatized women and children we've interviewed, distraught families, unable to protect themselves. The pain we put them through, to recount, to relive, their nightmares.

Time and again, though, it seems telling the world their stories has little tangible impact on their reality of their lives. And now I'm face-to-face with a man who says he was part of the suffering, albeit by his own account not complicit and not guilty.

I am left with the thought perhaps Adam's words carry even greater power. If his story is true -- and it mirrors other accounts emerging from Darfur -- then it implicates the government in these terrible crimes.

All About Darfur • Sudan