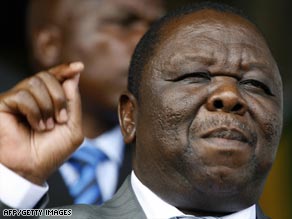 Zimbabwe's opposition, led by Morgan Tsvangirai, above, have formed a unity Cabinet with the ruling party.

Roy Bennett, the Movement for Democratic Change (MDC) treasurer and the country's agriculture deputy minister-designate, is charged with illegally possessing firearms for the purposes of trying to commit acts of insurgency, banditry and terrorism and to illegally leave the country last week, his lawyer said.

Trust Maanda told CNN on Tuesday: "The charges were changed from treason which the state had initially charged Bennett, I am sure they discovered it could not stand. Even these new charges will not stick - they have not basis at all."

Bennett was arrested last Friday as he was about to leave the country for South Africa. He was arrested as President Robert Mugabe swore-in the cabinet.

Bennett is being held in police custody in the eastern city of Mutare about 300 km (187 miles) from Harare facing charges of planning terrorism and insurgency.

The continued detention of Bennett and other MDC supporters shakes the foundation of the coalition government formed by Mugabe and MDC leader Morgan Tsvangirai.

But on Monday the Zimbabwe's finance minister Tendai Biti from the MDC told South Africa's Talk Radio 702 that his party would not pull out of the coalition government despite the arrest of Bennett.

"You have to sympathize with people that have no other hope other than this experiment. That alone is a force that will make you take a lot of nonsense for their sake," said Biti. "We will have to call an (emergency) meeting of our national council and decide," Biti said.

The unity government was formed after nearly a year of political unrest, following a disputed presidential run-off in June which Mugabe won. Tsvangirai had won the first round in March.

The government is expected to drag Zimbabwe out of its political, humanitarian and economic crisis.

More than 30 MDC supporters are in jail since December facing charges of plotting to topple Mugabe. They had been abducted from their homes and could not be accounted for from October to December under the cover of darkness by secret agencies.

Tsvangirai had vowed not to enter into the coalition unless they have been released.