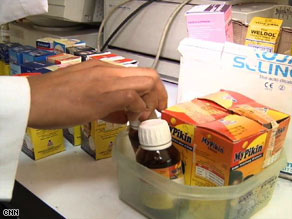 The My Pikin teething medicine has been reomved from shops in Nigeria.

Some 111 babies and children have been sickened since November by the tainted batch of My Pikin, which was found to contain diethylene glycol, which is used in some antifreeze and brake fluid.

Exposure to the solvent can damage the kidney, heart and nervous system, Osotimehin said, and it can be fatal.

The dead ranged from age 2 months to 7 years, he said. "The death of any Nigerian child is a great loss to the nation," he said.

And the Nigeria National Agency for Food and Drug Administration and Control, which is investigating the issue with the Ministry of Health, has shut the drug maker down.

Former officials of the company could not be reached for comment.

The food and drugs agency has said it believes the company thought it was buying propylene glycol, a normal ingredient in the teething medicine.

The government has asked that all My Pikin teething formula be returned; however, it was not immediately clear if that had been done.

Symptoms of diethylene glycol exposure include: abdominal pain; nausea or vomiting; dizziness; drowsiness; confusion; and decreased or lack of production of urine.