HARARE, Zimbabwe (CNN) -- A Zimbabwe High Court judge is trying to take the country's first lady to court, accusing her of using political muscle to wrest from him a farm he was given during the land seizures. 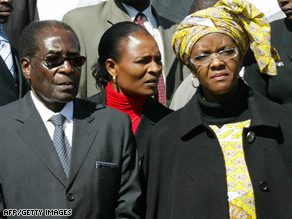 The matter has not been given a date, however, amid reports that other judges have been refusing to hear it.

The judge said he acquired the farm in December 2002 as part of President Mugabe's controversial land grabs, in which Mugabe took land from white commercial farmers and distributed it to black Zimbabweans.

In an affidavit, filed at the High Court in Harare, the judge said the "unlawful conduct" by Grace Mugabe's company, Gushungo Holdings, amounted to spoilation -- or taking of the farm by force.

He said emissaries of the first lady have been visiting the farm frequently and issuing instructions to workers, according to court documents.

"There is clearly no lawful basis for such interference, which conduct, by its very nature, amounts to spoliation," Hlatshwayo wrote in the papers.

Lands and Resettlement Minister Didymus Mutasa said the judge had been given alternative land as compensation for the farm that Grace Mugabe wants to have. Mutasa opposes the judge's affidavit.

Hlatshwayo said he had been operating his farm in "quiet, undisturbed, peaceful possession, occupation and production" since it was allocated to him.

Since the land grabs, Zimbabwe has been facing acute shortages of food that critics say is a result of Mugabe giving the land to inexperienced peasant farmers. But Mugabe blames the West for the shortages, saying Western countries are sabotaging him after he took the land for his people.

The legal wrangle comes after Grace Mugabe was accused of assaulting a journalist in Hong Kong who wanted to take photos of her while she was on a shopping spree.

Lawmakers were supposed to debate a bill next week for a constitutional amendment that would create the new posts called for under the deal, including the post of prime minister for opposition leader Morgan Tsvangirai.

The delay could prolong the country's political and economic crisis.

The delay comes a day after the MDC accused Mugabe's ZANU-PF of backtracking on the implementation of a power-sharing deal the party signed with Tsvangirai in September.

While government officials could not be reached for comment, Zimbabwean Justice Minister Patrick Chinamasa was quoted by the state media as saying the delay in debate on the constitutional-amendment bill would push back next week's deadline.

A coalition government is seen by many as a panacea to halt the meltdown of Zimbabwe's economy. The country is also facing its worst humanitarian crisis, with acute shortages of all essentials such as fuel, food, electricity and public-health delivery system.

A ravaging cholera outbreak has affected 65,000 people and claimed close to 3,500 lives since its outbreak in August.