NAIROBI, Kenya (CNN) -- Officials found 13 bodies in the rubble of a scorched supermarket in downtown Nairobi Friday and are investigating a tip that security guards locked people in the burning building, a police spokesman said. 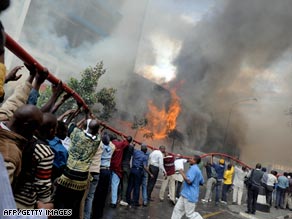 Members of the public helped to fight the fire which left at least 47 people missing.

The blaze started on Wednesday afternoon in the Nakumatt supermarket.

The Standard Newspaper reported harrowing tales of families trying to find their missing loved ones, at times making the job of firefighters more difficult.

So many people crowded the scene that police on foot and on horseback periodically chased them away. Riot police with tear gas and batons stood nervously around the edge of the scene -- where a barricade has been erected.

Joseph Mwangi waited among the crowd, hoping for news of his cousin Daniel. On Wednesday, Mwangi sent 16-year-old Daniel Njoge with 6,000 shillings (about $75) to the market.

"He was coming to shop for school," said Mwangi, a waiter at a nearby restaurant. "I sent him to the store to get stationery supplies."

"On Wednesday night, I got so worried. Now I think he is just in there," Mwangi said, pointing at the burned-out store.

"The response was not good," he said. "A person who fights a fire must go into the building, but they just stayed outside."

Mwangi registered with the Kenya Red Cross on the scene, as scores of others did, and now he waits.

Justin Mule, who works at the Stanley Bookstore across the road from the supermarket, described the start of the fire to CNN: "I saw smoke coming up from the building on Wednesday afternoon. In a few minutes, there were explosions. I saw some guys jumping from the burning roof. Soon after the fire, I saw the store security guards closing the doors because they feared looting. The doors were locked. That was a mistake. They shouldn't have locked the doors."

Other witness corroborated his account. Police launched a criminal investigation to look into that allegation, said Eric Kiraithe, a police spokesman

Employees of the supermarket refused to comment on the allegations.

The fire has angered Kenyans for what they perceive is a lack of disaster preparedness. Local newspaper editorials slammed the government's response to the tragedy.

"Disaster preparedness is still a challenge, and the operation was hampered by the Nairobi city layout," said Kenya Red Cross spokesman Titus Mung'ou said. Emergency numbers failed to work and water ran out during attempts to put out the fire, he said.

According to local news reports, the fire ignited Wednesday afternoon during a busy hour in the 24-hour supermarket. Hundreds of people crowded around the scene and tourists peered through their hotel windows as firefighters, security guards and civilians struggled to get the fire under control.

Periodic explosions rocked the city and debris fell around the building. The crowd cheered each incoming fire truck, and water had to be brought to the scene from a nearby soccer stadium.