(CNN) -- Seven French soldiers were killed when their military helicopter crashed off the coast of Gabon, the country's official news agency said Sunday. 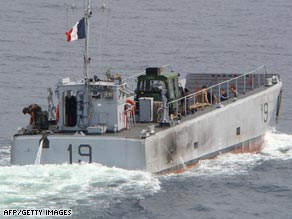 A French ship with investigators on board look for clues near the crash site area.

French Defense Minister Herve Morin arrived in Gabon's capital of Libreville on Sunday and met with President Omar Bongo to coordinate recovery efforts for the body of one of the seven soldiers whose remains had not been found.

According to the French minister, "the cause of this tragedy remains unknown. It may be natural or human, or a combination of both."

Divers were inspecting the helicopter, which was in water 35 meters (about 115 feet) deep, Morin said.

French forces were in the former French colony for maritime security exercises with Gabonese soldiers when the incident happened.

All About Gabon • France