WASHINGTON (CNN) -- Piracy off the coast of Somalia can't be stopped until there is some authority to bring pirates to justice, according to the commander of the U.S. Navy's Fifth Fleet, based in Bahrain. 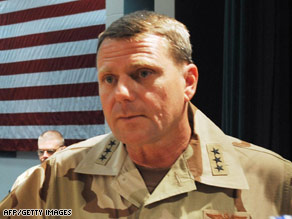 Because there is no working government in Somalia and no country is willing to take captured pirates, bring them to trial and detain them, there is no deterrent for pirates to stop attacking ships, Vice Admiral William Gortney said at a Pentagon briefing Thursday.

"The problem is there's not a way to -- until we have a mechanism [to hold them] accountable and try them for their actions, there's no way to -- to finish the problem," Gortney said.

The United States is making a deal with a country in the eastern Africa region to hold and try pirates captured by the U.S.-led Combined Task Force 151, a new maritime anti-piracy mission started earlier this month.

He said an official announcement would be made after the deal with the country is official.

"That [number] should tell you that we're not -- we're not being 100 percent successful on the deterrence of the attempt. And that's where we have to go after," Gortney said.

There are ships from some European and Asian countries patrolling the waters independently as well, primarily guarding cargo ships from their own countries.

Pirating off of Somalia has increased during the past four to five years as fishermen from Somalia realize that pirating is more lucrative than fishing. Additionally, pirates are able to get away with the crimes because of the lack of government and overall lawlessness in the country.

Gortney said statistically the chances of ships being pirated off of Somalia less than one percent, but it won't be stopped until piracy is "disincentivized."