NAIROBI, Kenya (CNN) -- Pirates on a seized Saudi-owned oil supertanker are delaying release of the ship despite receiving a ransom because of a fatal drowning accident that killed four of their colleagues, a journalist who spoke with one of the pirates told CNN. 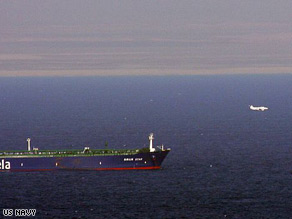 A small aircraft is observed by the U.S. Navy flying over the Sirius Star during a seeming ransom payment Friday.

The pirates had been expected to release the Sirius Star, which they've held since November 15, after a ransom payment was parachuted onto the ship.

The journalist told CNN that the pirate who spoke said four pirates drowned after a skiff carrying leaving the Sirius Star capsized due to rough seas. Sea charts showed that waves in the area were reaching 5 to 7 feet at the time.

There were five pirates in the skiff and one survived, the journalist said. The bodies of the other four were recovered, he said, adding that this will delay the exit of the pirates still remaining on board the ship and thus affect the ship's release after payment of the ransom.

The tanker was carrying two million barrels of crude oil worth about $100 million when pirates hijacked it off the coast of Somalia.

Pirates seized the Sirius Star more than 450 nautical miles off the African coast in one of their most audacious hijackings to date.

The pirates told another journalist that they received $3 million in ransom money, but lost part of it when the skiff capsized. The remaining ransom money is still aboard the ship with the rest of the pirates.

The U.S. Navy took photographs and observed as an apparent ransom payment was parachuted aboard the tanker. The pirates aboard the supertanker have equipment to check for counterfeit bills, authorities said.

"While the potential release of the Sirius Star is undoubtedly excellent news, we must not forget that nearly 300 other merchant mariners (on other ships) are still being held captive," said Commodore Tim Lowe, deputy Combined Maritime Forces commander.

Hijackings off East Africa are a cause of growing international concern, spurring a number of international navies to patrol the pirate-wracked Gulf of Aden.

Dozens of ships have been attacked in the gulf by pirates based in a largely lawless Somalia in recent months.

The area involved, off the coast of Somalia and Kenya as well as the Gulf of Aden, equals more than 1.1 million square miles. That is roughly four times the size of Texas, or the size of the Mediterranean and Red Seas combined.