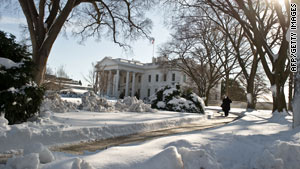 The White House basks under a blanket of picturesque white snow on Sunday.

(CNN) -- Airlines were scrambling to accommodate passengers affected by the cancellation of hundreds of flights after a monster weekend winter storm that blanketed a swath of the East Coast.

In addition to refunds, a spokesman for Delta Air Lines said the company is providing a weather waiver that allows passengers to reschedule without a penalty if they were scheduled to travel before Christmas.

"We're doing everything we can to accommodate customers to get them to their holiday destinations," said Paul Skrbec, Delta spokesman.

American Airlines said it would add extra flights, use bigger planes where possible and reflow passengers to other flights.

Passengers who were affected can switch flights with no change fees through Thursday, said Charley Wilson, airline spokesman.

Continental Airlines said though flights are extremely full because of the holidays, it is working on a "case-by-case basis" to ensure passengers get home for the holidays.

Passengers can also either get a refund or change their flights for free at Continental's Web site or through the 800 number, said spokeswoman Mary Clark.

Record snow blanketed some areas Sunday, including 23 inches in Bethesda, Maryland, and 24 inches in Medford, New Jersey. Philadelphia, Pennsylvania, received 23.2 inches -- its second-highest snowfall ever in a single event.

At New York's LaGuardia Airport, some passengers were resigned to their fate.

"You sort of crumble once, get it over with and then put on a smile and just understand that's the weather and there's nothing you can do about it, really," said Mira Chopra, who was stranded at the airport.

The storm, known as a nor'easter, blanketed the mid-Atlantic region and the heavily populated Interstate 95 corridor.

Meanwhile, western North Carolina residents were digging out from the powerful storm. About 28,000 households had no power into Sunday night, said Drew Elliot, spokesman for Progress Energy. In Washington, Mayor Adrian M. Fenty said the storm is "perhaps the biggest we've seen in several years."

"We are going to throw everything we have at it to keep the District open for business on this busy pre-holiday weekend," Fenty said when he announced the snow emergency. But, he also urged residents to stay put in their homes.

"We urge everyone if you don't have to go anywhere, wait. We should have a lot of streets ready to go by rush hour Monday. And, hopefully, all of it done between Monday and Wednesday."

Nine people were taken to a hospital after a bus and a city snow plow collided, a D.C. fire official said. The injuries were not considered serious.