(CNN) -- Tropical Storm Danny quickened its pace northward Friday night, as forecasters warned it could produce dangerous surf conditions and rip currents along the U.S. coast over the next day or two. 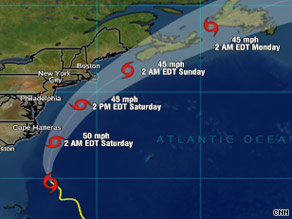 Tropical Storm Danny is expected to turn to the north and pick up speed.

A tropical storm warning -- meaning winds of 39 to 73 mph (63 to 118 km/hr) are likely within 24 hours -- may be required for portions of the North Carolina coast Friday night.

Large swells from Danny were expected to produce "dangerous surf conditions and life-threatening rip currents" along the coast during the next day or two, forecasters said.

Danny's maximum sustained winds were near 40 mph (65 kph), making it barely a tropical storm, the hurricane center said. Some "slight strengthening" was possible Friday night, it said, but the storm's intensity was not expected to change much on Saturday.

Forecasters predicted that the storm would become extratropical Saturday night. Extratropical storms differ from subtropical ones in various technical characteristics relating to temperature and winds.

As of 11 p.m. ET, Danny was centered about 265 miles (425 kilometers) south of Cape Hatteras, North Carolina. It was moving north-northeast at about 12 mph (19 kph), forecasters said, and was expected to speed up and turn north-northeast over the next few days.

The hurricane center said that interests from the Carolinas northward to New England and the Canadian Maritimes should monitor the storm's progress.