(CNN) -- Hurricane Felicia had maximum sustained winds of 140 mph Thursday, but forecasters predicted the storm, which is heading toward Hawaii, would weaken in the Pacific later in the day. 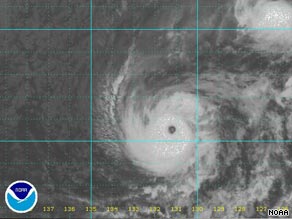 Forecasters predict Hurricane Felicia will weaken as it moves over colder water.

The Category 4 storm's reduction in intensity was expected to come as it moved over cooler waters, according to the National Hurricane Center in Miami, Florida.

Felicia could reach Hawaii on Tuesday morning, according to forecast tracks, but by that time the storm will have weakened to a tropical depression with winds of about 35 mph, the center said.

As of 8 a.m. local time, Felicia's center was about 1,510 miles west-southwest of the southern tip of Mexico's Baja California and 1,545 miles east of Hilo, Hawaii.

Hurricanes 101: How hurricanes are classified »

The storm was moving northwest near 10 mph, and a gradual turn to the west-northwest was expected over the next 48 hours.

"If anything, it will be a rain-making system over the (Hawaiian) islands," said Richard Knabb, deputy director of the Central Pacific Hurricane Center.

Knabb said there are no real storm preparations under way in Hawaii, but officials are keeping an eye on the storm "just in case."