(CNN) -- Temperatures reached 94 degrees by noon in Seattle, Washington, on Wednesday and were expected to keep climbling as a record heat wave gripped the Pacific Northwest. 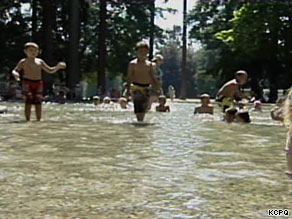 Children take relief from the heat in Seattle, where temperatures reached 94 degrees Wednesday.

"One-hundred is the all-time record for Seattle for any day, for any month, for any year," according to Cliff Mass, professor of atmospheric sciences at the University of Washington.

But cranking up the air conditioning isn't an option for many in Seattle.

"We're really not prepared for it," Mass said. "Most homes don't have air conditioning and a lot of stores don't. This is not like the East Coast or the Southwest. Temperatures generally in the summer are only in the 70s. Eighties are considered pretty warm."

Mass' weather blog -- cliffmass.blogspot.com -- warns that heat kills more people around the world every year than storms do.

With current temperatures, evenings don't provide much relief, either. Because of unusually high humidity, temperatures haven't been dropping to the typical mid- to high-50s.

Seattle had a high of 97 degrees on Tuesday, tying its all-time high recorded in 1998. Tuesday's low matched the record of 69 degrees.

The temperature in Olympia, Washington, was 101 degrees Tuesday, exceeding the previous high of 100 in 1998, according to the National Weather Service.

The heat wave has lasted several days, which is also unusual. What Mass calls the onshore push -- a surge of air from over the Pacific Ocean -- typically cools the area after a few days. Those winds are expected Friday.

Oregon also is feeling the heat and posting record highs.

All About Weather • Seattle • Portland