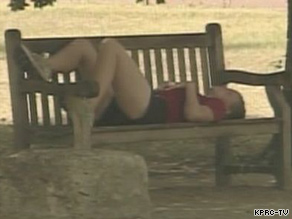 A woman tries to beat Houston's record heat by lying on a bench in the shade.

The city sweltered with a high temperature of 104 degrees Wednesday, a record high for June 24, forecasters said. The previous record high for the date was 99 degrees, set in 1980.

Heat indices, a combination of temperature and humidity, are breaking the 110-degree mark in many cities.

Forecasters predicted a high near 100 for Houston on Thursday, but the temperature could rise into the triple digits in outlying areas, said CNN meteorologist Reynolds Wolf.

The weather service posted heat advisories for Houston; Dallas, Texas; and New Orleans, Louisiana, indicating that temperatures in those cities will feel like 100 to 105 degrees because of high humidity.

In the Houston community of Bayland Park, the elderly were taking advantage of the air-conditioned Community Center.

"I don't like hot weather. I never have and never will," Teet Charloton told CNN affiliate KPRC-TV in Houston. "But we have to have it. I go from the car to the house or come in here and go back the same way. I don't do much shopping, that's for sure."

Betty Dante added, "It is very hot outside. ... I think as you get older, you feel the heat more."

In southwest Houston, Leticia Alvarado is profiting from the heat.

The unemployed Houstonian has been running along the median on Hillcroft Street at Bellaire Boulevard for seven weeks. She is selling water for $1 a bottle.

Other cities also were sweltering.

An excessive heat warning was issued for St. Louis, Missouri, on Thursday through 7 p.m. CT Saturday. Forecasters predicted a high near 96.

Cloud cover was expected to make temperatures there a little cooler Thursday, but the weather service warned, "A hot and humid air mass remains over the area which will continue to control weather over the region through Saturday."

Afternoon and early evening heat index readings of 100 to 110 were expected in the Missouri city every day through Saturday.

Young children, the elderly and people with chronic sicknesses were advised to stay inside if possible.