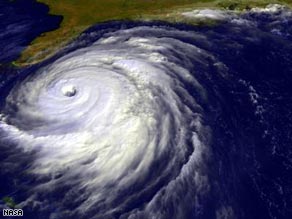 "While we cannot prevent hurricanes, we can prepare, and we must," Commerce Secretary Gary Locke told reporters at Reagan National Airport, just outside of Washington.

The Atlantic hurricane season begins June 1 and runs through the end of November.

Locke said it is likely there will be nine to 14 named storms, with four to seven of those becoming hurricanes. Of the hurricanes, NOAA predicts that one to three will be major hurricanes -- storms classified as Category 3 on the Saffir-Simpson scale of storm intensity -- with winds of 111 mph or higher.

In 2008, there were 16 named storms and eight hurricanes, five of which were major. It was among the busiest and costliest seasons to date, with about $54 billion in damages, according to the National Climatic Data Center.

Learn more about hurricanes and how you can stay safe »

The weather agency had predicted a total of 12 to 16 storms last year.

Should El Nino develop in the equatorial eastern Pacific this summer, or if ocean temperatures in the eastern tropical Atlantic stay cooler, storm activity could be diminished, NOAA said.

The weather agency will release an updated hurricane outlook in August, ahead of what it says is historically the peak period for hurricane activity.

"Hurricane season is upon us, and to anyone who lives or works in hurricane-prone areas, to any of you who have family or friends in hurricane prone areas, NOAA's message is clear -- be prepared, have a plan," NOAA Administrator Jane Lubchenco said.

The first named storm of the Atlantic season will be named Ana.

All About U.S. National Oceanic and Atmospheric Administration • Weather