(CNN) -- A mother and her infant were killed by a tornado that hit Murfreesboro, Tennessee, on Friday, a family member told CNN. 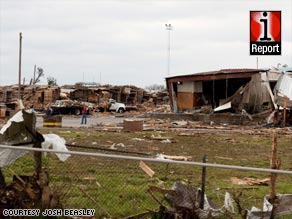 About 36 people were injured, at least two of them critically, officials said.

Early Saturday, officials said about 250 homes had been damaged or destroyed.

The woman who was killed, Kori Bryant, was at home with her daughter, Olivia, when the tornado struck, said family member Mark McClure.

Another family member, who found the mother and daughter after the tornado, said attempts were made to resuscitate the infant, but she couldn't be saved, according to McClure.

The baby was found in her car seat. Her parents had put her in the seat, thinking it would be safer for her, McClure said. The Bryants were in the hallway with the baby when the tornado struck.

The woman's husband, John Bryant, was found about two houses away, McClure said. His back and ribs were broken, and a lung had collapsed.

He was taken to Vanderbilt University Hospital, and he will undergo surgery when his blood pressure stabilizes, McClure said. John's brother told him yesterday that his wife and daughter had died, McClure said.

The bad weather began about noon when a band of severe thunderstorms swept across the state from the southwest, said Donnie Smith, a public information officer with the Tennessee Department of Emergency Management in Nashville.

Just before 1:40 p.m., the tornado hit Murfreesboro in Rutherford County, 30 miles southeast of Nashville, he said.

The search-and-rescue effort was continuing into the evening, Smith said.

Elsewhere in the region, the town of Mena, Arkansas, is cleaning up after a tornado roared through, killing three people and damaging or destroying more than 100 homes, an Arkansas official said.

The town looked like a "war zone" as soldiers from the Arkansas National Guard went house to house searching for victims of the twister that hit Thursday night, said Capt. Christopher Heathscott.

About 50 soldiers also helped with security and food distribution.

Mena, population 6,000, took a heavy hit on the west side of town, as the storm swept through downtown before heading up state Highway 71, said Tommy Jackson from the state Department of Emergency Management.

"It looks like a war zone out here," said James Reeves, also from the department.

Watch scenes of devastation in Mena »

The tornado damaged the county hospital, Mena City Hall, a middle school, churches, a library, the Masonic lodge and the courthouse -- which houses the 911 emergency dispatch center and a detention center, Reeves said. He said electricity and gas were out in the western half of the city.

Two plants at an industrial park were destroyed, said reporter Charles Crowson of CNN affiliate KTHV-TV. He said utility crews were trying to stop a gas leak there.

Polk County Sheriff Grady Judd told Crowson the county detention center was "uninhabitable." There were 18 inmates in the jail at the time of the tornado, and they were moved to neighboring jurisdictions, he said. iReport.com: Are you there? Send photos, video

CNN's Melissa Roberts and Dave Alsup contributed to this report.

All About Tornadoes • Arkansas