(CNN) -- A snowstorm that could last up to 18 hours was on its way to southern New England, and Boston, Massachusetts, could be snowed under with up to 15 inches, the National Weather Service said Sunday afternoon. 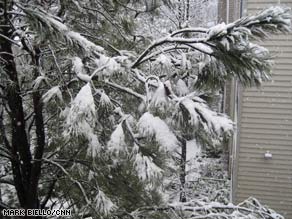 A snowstorm is threatening parts of the Northeast with as much as 15 inches of snowfall.

Monday's commuters in the region could face a nightmare with blowing and drifting snow, freezing temperatures, gusty winds and periods of sleet. Flight delays and cancellations were likely, the weather service said.

Winter storm warnings straddled Interstate 95 from Maine to the Carolinas, and they also were issued in parts of Georgia and Alabama.

Delta Air Lines canceled 300 flights, most of them to or from Atlanta, because of snowy weather, spokesman Brian Kruse said Sunday. It was snowing in Atlanta, where Delta is based, and 2 to 4 inches was expected.

David Spear, a spokesman for the Georgia Department of Transportation, expected traffic chaos.

"People tend to get a little animated out here at the sight of snow," he told CNN. "Our concern is going to be -- as we move into the evening hours and the temperature drops -- that that slush becomes ice and then we have a real situation for our morning commute tomorrow."

He said about 200 DOT trucks were deployed to help make roads safe for motorists.

In northern Connecticut, southern New Hampshire and most of Rhode Island and Massachusetts, a winter storm warning was to be in effect from 9 p.m. Sunday to 5 p.m. Monday, the weather service said. Such a warning is issued when winter weather conditions are expected to make travel dangerous.

Both airports were expected to reopen before midnight.

The heaviest snow, up to 15 inches, was forecast for the heavily populated I-95 corridor between Boston, Massachusetts, and Providence, Rhode Island, northeast Connecticut and north into the Merrimack Valley in northeast Massachusetts, the weather service said. As much as 3 inches per hour could fall between 10 p.m. Sunday and 10 a.m. Monday.

In Washington, Mayor Adrian Fenty declared a snow emergency Sunday afternoon, meaning any street designated as "snow emergency route" by signs would be cleared of any parked vehicles, towed if necessary, so snow plows could work unimpeded.

"It is important that our crews have access to the roads from curb-to-curb in order to plow the snow," said Fenty, whose city was expected to get up to 8 inches of accumulation Sunday night and early Monday with accumulations up to 10 inches by Monday night.

"This is one of the first plow events we have had this season, and we want to ensure we are able to maintain clear and safe roadways as we move into Monday morning," Fenty said.

Forecasters said as many as 14 inches of snow could pile up in Philadelphia and New York City, starting Sunday night.

Lesser amounts of snow were reported as far south as Alabama, although Charlotte, North Carolina, could see up to 8 inches.

In Memphis, Tennessee, CNN iReporter George Brown said Sunday that forecasters had predicted "Teflon snow," which wouldn't stick to the ground. But the snow that fell was much heavier, he said. iReport.com: Share photos of icy, snowy weather in your town

"We were getting an inch or more an hour," he said. "Some roads are impassable because the folks here aren't use to dealing with slick streets. Many cars are off the interstate, and hotels are packed," Brown said.

"I talked with our maintenance director, Bill Hazlerig, who tells me he hasn't seen snow like this in West Tennessee in many years," Julie Oaks from the Tennessee Department of Transportation told CNN.

Watch the situation in Tennessee »

Tennessee called in 260 employees in the western portion of the state alone to salt and plow roadways through the night, she said. By Sunday afternoon, about 45 cars and semi-trailers had pulled over on the shoulder of Interstate 40, Oaks said.

Watch the snow come down in Memphis »

Rebecca Horsley, an iReporter from Pelham, Alabama, near Birmingham, said snow began falling there Sunday at 6 a.m., interfering with her planned birthday celebration.

"It looks like we may have to reschedule," she said.