(CNN) -- A massive winter storm system that left a deadly swath of ice and snow from Texas to Maine pushed into Canada early Thursday, leaving emergency officials to tally the damage. 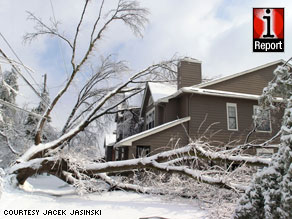 A tree pulls on utility lines Wednesday in Louisville, Kentucky, in a photo from iReporter Jacek Jasinski.

The storm caused at least 17 deaths and cut power to more than a million homes across the Midwest, according to state emergency management agencies.

While the massive storm dropped sleet and ice across the Mid-South and Midwest, it changed to a snowmaker by the time it reached the Northeast, the National Weather Service said.

The storm left "absolutely everything in northwest Arkansas ... at a standstill," an Arkansas police officer said.

He added, "Our officers are wearing metal cleats just so they can walk the streets." iReport.com: Send your wintry weather photos, videos

Northwest Arkansas has been hit hard, and schools and universities were closed throughout the state.

See the impact of the storms »

"It's like a ghost town," Barbara Rademacher of Rogers, Arkansas, said Wednesday morning.

"It's just white and ice," Rademacher said while looking out her kitchen window at a street devoid of traffic and littered with the ice-weighted branches of oak trees.

"The roads are impassable, and there are shelters set up in every community because there are so many people with power out," she said.

The storms were extending their reach into the New England states Wednesday.

The National Weather Service issued freezing rain, ice and winter storm warnings from Texas up through the Ohio Valley and into New England.

Watch how to have fun in the snow »

As of Wednesday, the Oklahoma Corporation Commission reported at least 27,621 homes and businesses affected by power outages across the state. The commission office was closed Wednesday because of the icy conditions.

For Dorenda Coks, assistant manager at City Bites in Oklahoma City, Oklahoma, the winter blast was a completely new experience.

Watch the terrible driving conditions in Oklahoma and Arkansas »