(CNN) -- Bitter cold weather was sweeping across the nation Thursday, putting the Midwest in a deep freeze. 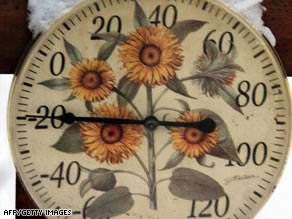 A thermometer registers minus 20 degrees Thursday in Hudson, Wisconsin.

It was brutal in Ames, Iowa, on Wednesday.

"Last night, the temperature was still above zero (3 degrees Fahrenheit), but the wind chill (minus 14 degrees) was cold enough to make your skin burn," iReporter Kevin Cavallin said.

"When it gets this cold, your hands are just in pain when doing something as simple as carrying bags of groceries from the car to the apartment." iReport.com: What's the weather like near you? Send photos, video

In Minneapolis, Minnesota, it felt like 40 below because of the wind chill, CNN meteorologist Rob Marciano said. It was 48 below in Fargo, North Dakota, where unprotected fingers could suffer frostbite in 60 seconds.

Watch the freeze in Iowa »

The freezing temperatures are likely to remain in the East through the weekend, according to the National Weather Service. There were low teens Thursday along much of the Interstate 95 corridor, which hugs the Atlantic from Maine to Florida.

It was 17 in New York, which had a moderate snowfall Thursday that delayed flights a few hours on the ground at LaGuardia Airport.

"If you live east of the Mississippi River, the temperature at mid-morning may be the best you'll get," Marciano added.

Temperatures dipped to 19 degrees below zero in Michigan and 10 below in Chicago, Illlinois. Snow caused more traffic nightmares in the Midwest.

Meanwhile, an icy cold front was pushing into the Southeast, with a cold high-pressure center expected to remain over the area through Saturday, the National Weather Service said.

Another cold front is to move in late Sunday.

The sun came out in Georgia, but forecasters said the weather would deteriorate by evening. Much of Georgia, including Atlanta, will be under a wind chill advisory from 7 p.m. Thursday to 7 a.m. Friday. Thursday's high in the state could reach 59, but the thermometer could reach as low as 14 at night, the weather service said.