(CNN) -- River waters spread over highways and farms, towns and parks in Washington on Thursday, shutting down traffic on a 20-mile stretch of heavily traveled Interstate 5 between Seattle and Oregon and threatening the federal roadway north of Seattle. 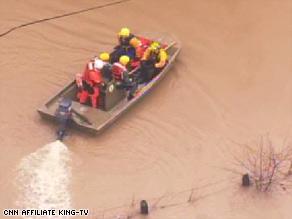 Rescue boats are sent out Wednesday in Pierce County, south of Seattle, Washington.

"If you're trying to do commerce between Portland (Oregon) and Seattle, there is no way right now," said Bob Calkins, a spokesman for the Washington State Emergency Operations Center in Camp Murray, near Tacoma.

"That's the major way into Washington state from Oregon."

Flooding south of Seattle near Chehalis covered parts of I-5 with 30 inches of water, prompting its closure until at least Monday, state transportation officials said. And state and local roads were also victims of the water.

"The problem is, the one real good detour is just as flooded," Calkins said.

North of Seattle, a levee failure in Arlington brought the Stillaguamish River up to the edges of I-5, which remained open although some access ramps were closed, transportation officials said.

The rain also caused Amtrak to suspend service between Seattle and Portland until Saturday, "with no alternative transportation," the rail line said Thursday on its Web site. iReport.com: Are you there? Share pics, video

Across the state, a number of rivers had crested, but flooded roads remained hazardous.

The risk of landslides was high, leading to the closure of all passes across the Cascades, officials said.

A meteorologist for the National Weather Service in Seattle said 15 inches of rain that began Monday had ended.

The rainfall swept across virtually all of the state, but its biggest effects occurred along the western half of Puget Sound, Calkins said.

The swollen Puyallup River threatened the city by the same name, but Loretta Cutter, sprang into action.

The administrator of a group home and a longtime resident there helped evacuate 47 residents from the Valley Community Inn, a home for the mentally challenged and developmentally disabled, to a shelter at a nearby church. And she made sure her husband and a grandson left their one-story rambler house and got safely situated.

"It's a situation you don't realize you are going to be in; it's always someone else," she said from the shelter at the Sunrise Baptist Church in Puyallup, a few miles east of Tacoma. "It was pretty traumatizing to all of us."

Cutter is one of 40,000 western Washington state residents in at least 19 communities whom authorities asked to leave their homes Thursday amid heavy flooding along the region's rivers and streams.

Only 260 of them sought shelter Wednesday night at the 39 shelters for people, Calkins said.

In addition, seven livestock shelters and two pet shelters were set up, he said.

Meanwhile, the torrential downpours of the past few days transformed Thursday into drizzle, common in western Washington, which typically gets less rainfall in any given year than does Miami.

"It just drizzles every day, or so it seems, whereas in Miami, when it rains, it's a bellywasher," Calkins said.

This week's flooding was worsened by a warm spell that melted up to 7 feet of snow that had fallen around Puget Sound, he said.

Health authorities have issued occasional boil-water orders, but that's not what worries Calkins.

"The larger issue is, as people go to their homes, they may be walking through floodwater that is contaminated by sewage," he said.

All About Floods • Seattle