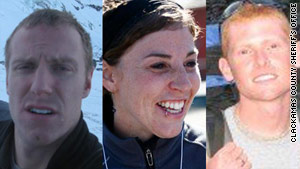 (CNN) -- The search for two missing hikers on Oregon's Mount Hood has moved from a search operation into a recovery operation, authorities said Wednesday.

"It was our hope that we might get a window today to take a last look," Clackamas County, Oregon, Sheriff Craig Roberts told reporters. "Unfortunately, that hasn't happened."

Anthony Vietti, 24; Luke Gullberg, 26; and Katie Nolan, 29, set out about 1 a.m. Friday on what was to have been a fairly easy "semi-technical" hike in which they would have descended the south side of the mountain, Sheriff's Deputy Scott Meyers has said.

Authorities said Tuesday they were suspending the search, citing the threat of avalanches. Roberts said Wednesday the mountain was experiencing 60 mph winds and the weather is not expected to clear anytime soon. However, the Sheriff's Office will continue to monitor weather conditions and will launch an organized recovery mission when conditions improve, he said.

"God has given me a peace about Katie," Nolan's father, David Nolan, told reporters Wednesday. "He's given me strength."

"This has not shaken our faith," said John Vietti, Anthony Vietti's father. "This has strengthened our faith."

On Tuesday, authorities said there was little hope the two would be found alive.

"Could they be alive? Yes," said Dr. Terri Schmidt, physician supervisor for American Medical Response in Clackamas County. "Is it very likely? No."

A specialist in emergency medicine, Schmidt noted that "at about 48 hours -- two days -- the chances of finding somebody alive after that go down to about 1 percent."

Operations coordinator Nate Thompson hypothesized that the hikers may have been involved in an accident and that Gullberg, the most experienced of the three, may have broken away from the others and begun to backtrack in an effort to seek help.

Above his body rescuers found a water bottle, a helmet, a harness, a camera and camera case and a mitten belonging to Nolan.

"Maybe Katie lost a mitten in an accident," Thompson said. If Gullberg did indeed seek to return for help and Nolan lost one of her mittens in an accident, he may have left his gear, his pack and his supplies and gloves with her, taking the lone mitten, he said.

But descending can be more difficult than climbing in some places. "If there was some form of an accident and Luke did downclimb, this is a much more difficult descent," he said.

Mount Hood rises 11,239 feet above sea level, with a base that stretches across 92 miles (148 km). It is the highest mountain in Oregon, a dormant volcano with steam constantly spewing from holes, according to the Web site mthood.org.