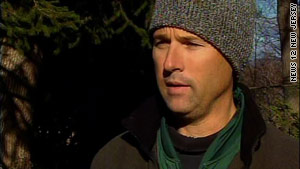 David Goldman has been fighting to get his son back after his wife divorced him and later died.
STORY HIGHLIGHTS

New York (CNN) -- A Brazilian court ordered Wednesday that 9-year-old Sean Goldman be returned to the custody of his father, David, in the United States, but his Brazilian relatives were expected to try to block the order, a Brazilian official said.

Outside his home in New Jersey, David Goldman told reporters he was heartened by the news, but would not consider his efforts successful until he and his son are reunited. He departed Wednesday night on a flight from John F. Kennedy International Airport for Rio de Janeiro.

"I'm hopeful," he said. "I can't be optimistic because I've gone down there so many times, always under the guise that the rule of law will be followed and Sean will come home to me and his family, and that doesn't happen."

The 3-0 ruling by the Federal Regional Tribunal in Rio de Janeiro upheld a June decision by the 16th Federal Court in Rio, which ordered Sean returned to his home in New Jersey in accordance with the 1980 Hague Convention on the Civil Aspects of Child Abductions.

But a Brazilian official with knowledge of the case predicted Wednesday's order would be appealed. So far, the boy's Brazilian family has filed 40 appeals, most of them procedural but one substantive.

The Brazilian high court is to take up any appeal on Thursday, said Rep. Chris Smith, R-New Jersey, who has been pressing the case for his constituent. "Frankly, every possible nuance has been appealed by the other side," he told CNN's "Situation Room." "Remember, this is an abducting family, they're kidnappers, but they have had a great deal of sway with the court."

The Supreme Court could still allow Sean Goldman to be returned to his father in the United States while it decides any appeal.

Goldman, a former model, said he had last spoken with his son in June, but they did not discuss the custody battle.

The case began in 2004, when his wife, Bruna Bianchi, took their 4-year-old son from their home in New Jersey to Rio de Janeiro for what was to have been a two-week vacation. She never returned, instead remarrying there and retaining custody of their son. She died last year in childbirth.

Goldman has argued that, as the sole surviving parent, he should be granted custody. But the boy's stepfather and his other Brazilian relatives have argued that it would be traumatizing to the boy to remove him from what has been his home for most of his life.

The case has drawn high-profile input, including pressure for the boy's return from Secretary of State Hillary Clinton, who said Wednesday in a statement that she was pleased to hear about the decision.

"We appreciate the assistance and cooperation of the government of Brazil in upholding its obligations under the Hague Convention on International Child Abduction," she said. "And it is my hope that this long legal process is now complete and that the Goldman family will be reunited quickly."

CNN's Jill Dougherty and Adam Reiss contributed to this story.