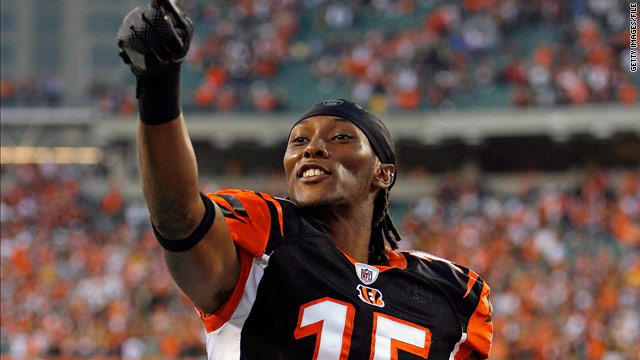 Receiver Chris Henry, 26, played for the Cincinnati Bengals for five seasons. He was on the injured reserve list before his death.
STORY HIGHLIGHTS
RELATED TOPICS

(CNN) -- Cincinnati Bengals football player Chris Henry died after he fell from the bed of a moving pickup truck during a fight with his fiancée, police said Thursday.

"Chris Henry died as a result of his injuries sustained during this incident," a Charlotte-Mecklenburg Police news release said. "Department detectives continue to work diligently on this active investigation."

Shortly before noon Wednesday, Henry's fiancée tried to drive off during a "domestic situation," only to have Henry jump into the bed of the truck, police said.

"The domestic situation continued between the operator and Mr. Henry," according to a police statement. Henry "came out of the back of the vehicle" about half a mile from the house, it said.

Henry was a native of Belle Chasse, Louisiana, according to the Bengals' Web site. He and his fiancée, Loleini Tonga, had planned to be married in March, the team said. Henry leaves three children -- two sons and a daughter, the team said.

Tonga's family lives in Charlotte. Bengals coach Marvin Lewis said he told players of Henry's death, speaking to them a couple of times Thursday. He declined to tell reporters what was said.

"That's between us," Lewis said.

Authorities described Henry's injuries Wednesday night as "life-threatening." He was taken to the Carolinas Medical Center in Charlotte.

The 26-year-old receiver played for the Bengals for five seasons but was on the injured reserve list after suffering a fractured forearm during a November 8 game against the Baltimore Ravens. The 6-foot-4, 200-pound Henry caught 12 passes for 236 yards and two touchdowns in eight games this season before being hurt.

Henry played at West Virginia University and joined the Bengals as a third-round draft pick in 2005, the team said.

He was in Cincinnati, Ohio, last weekend for an examination and was cleared to return to Charlotte to be with Tonga and her family, as no rehabilitation was necessary beyond periodic adjustments to his cast, a team statement said.

An article on the Bengals Web site called Henry "one of the best comeback stories in the NFL" before being injured, saying he had rebuilt "his life and career in a three-year climb from a series of off-field problems."

The problems, the article said, included four arrests, three NFL suspensions and a release from the Bengals in April 2008. But Henry had since "put his life back together," according to the article.

"He's a big part of what we are," left tackle Andrew Whitworth said in the article. "I really admire how he carries himself, how he's changed his life, and how he's made his career his passion. That's what this team has done. He's one of the guys that has helped give this team that attitude."

Henry had "finally seemingly reached the point where everything was going to blossom, and he was going to have the future that we all wanted for him and he wanted for himself. And then this tragedy cut him down," Brown said. "It's a terrible tragedy that just at the time he was running to daylight, if you will, his life was snuffed out."

Funeral details were pending and will be released later, Brown said.

NFL Commissioner Roger Goodell said in a statement, "Our thoughts and prayers go out to Chris' family, including his Bengals family. We have been in contact with the Bengals to offer our support through this difficult time."

Lewis said when he talked with Henry in August about coming back, "there was a different man that was sitting across from me and a different person. From that point on, we've seen pretty much a continual growth."

Tonga "had been a very steadying force in Chris' life," Lewis said.

According to an article on the Bengals' Web site, right guard Bobbie Williams spoke to his teammates during a locker room huddle.

Wide receiver Chad Ochocinco broke into tears before the cameras and could not finish, according to the article. Ochocinco was wearing Henry's No. 15 jersey as practice got under way Thursday.

Brown, Lewis and others spoke of Henry's gentle and soft-spoken nature, his big heart and his love for his children.

"Our football team, what they're feeling yesterday and this morning ... they watched a guy mature as a young man and work through adversity," Lewis said, adding that Henry became "a beacon of hope."

Lewis recalled seeing Henry at rookie camp, catching the first ball thrown to him and sticking up his finger in celebration.

Read SI.com's take on the death

"I told the receivers coach at that time, 'You better get him,' " he said.

The Bengals are one win away from clinching the AFC North title. Players will leave Friday for Sunday's game in San Diego, California. A memorial helmet decal and a coaches' pin will be worn during the game to honor Henry, the Bengals said.