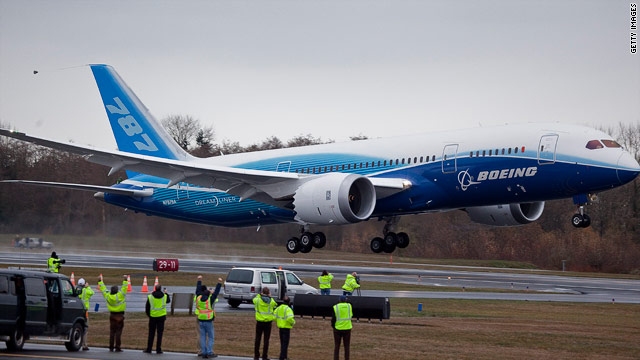 More than 12,000 employees and guests watched as the plane took off at 10:27 a.m. from Paine Field in Everett, Washington. It landed more than three hours later and about 40 miles away at Seattle, Washington's Boeing Field after having flown at a speed of 207 mph at 15,000 feet -- typical for a maiden flight, the company said.

During their time aloft, the chief pilot and captain tested some of the airplane's systems and structures while flight data were transmitted electronically to engineers at Boeing Field.

Boeing's fuel claims are linked to its design. It is the first major airliner to be made mostly of composite materials and, as a result, is lighter.

Depending on the configuration, the plane can seat 200 to 300 passengers and can travel more than 2,500 nautical miles.

But production delays and technical problems have stolen some of the Dreamliner's luster.

Many of the snags in the supply line have been blamed on the army of partners Boeing brought in to help with the construction.

Albaugh acknowledged that, "in hindsight," the level of outsourcing may not have been the best strategy. "There a few things we might have kept inside, yes," he said.

With 10 months of flight tests ahead, the 787s won't start flying commercially until at least 2011, the company said.

"There's a lot of work to do," Albaugh said.