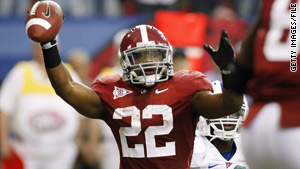 Mark Ingram is the first University of Alabama player to win the Heisman Trophy.

(CNN) -- Running back Mark Ingram was awarded the Heisman Trophy on Saturday night, becoming the first player from the University of Alabama ever to be named the best in college football.

Ingram delivered a tearful thank you after the announcement was made in New York and said he was "so excited" to bring Alabama its first Heisman.

The 2009 voting was the closest in the award's 75-year history, according to the Heisman Trophy Web site, with Stanford running back Toby Gerhart finishing only 28 points behind Ingram in the balloting.

Ingram, a sophomore from Flint, Michigan, was the top rusher in the Southeastern Conference, gaining 1,542 yards on 249 attempts. He also scored 15 touchdowns.

Alabama has won outright or shared 10 national championships dating back to 1925, according to the National Collegiate Athletic Association Web site, but before Saturday no Crimson Tide player had ever won the sport's most prestigious individual award.

Ingram and Texas' McCoy will meet again on the field on January 7, 2010, when their undefeated teams play in the Bowl Championship Series national title game at the Rose Bowl in Pasadena, California. Read more at SI.com

Florida's Tebow, a three-time Heisman finalist, won the award in 2007 and was seeking to become only the second player to win the trophy twice, after Ohio State's Archie Griffin in 1974 and 1975.

The Heisman's point total is reached by a system of three points for a first place vote, two for a second and one for a third, according to the award's Web site.

Ballots were mailed to 870 members of the media, as well as 55 Heisman winners and one fan, according to the Web site.