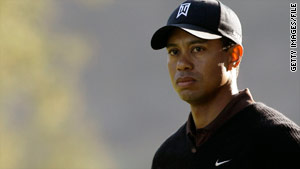 "I am deeply aware of the disappointment and hurt that my infidelity has caused," Woods says on his Web site.

(CNN) -- Tiger Woods announced that he is taking "an indefinite break" from professional golf, according to a statement posted on his Web site Friday.

"I am deeply aware of the disappointment and hurt that my infidelity has caused to so many people, most of all my wife and children," the statement says. "I want to say again to everyone that I am profoundly sorry and that I ask forgiveness. It may not be possible to repair the damage I've done, but I want to do my best to try."

The 33-year-old golfer, who tops the sport's world rankings, has been mired in controversy since he crashed his car outside his Florida mansion late last month. The crash prompted authorities to cite him for careless driving and fine him $164.

Woods was not required to talk to police about the wreck, and declined to talk with investigators on several occasions.

In the week following the crash, Woods apologized for "transgressions" that let his family down, on the same day that gossip magazine US Weekly published a report alleging that Woods, who is married to Elin Nordegren, had an affair with a 24-year-old cocktail waitress named Jaimee Grubbs.

US Weekly's report followed a National Enquirer article before the crash that the athlete was having an affair with a New York nightclub hostess -- an assertion the hostess vigorously denied, according to The New York Post. See the statement on Woods' Web site

It was not immediately clear how Woods' hiatus would affect his sponsorships, though Nike, his main sponsor, issued a statement saying Woods "and his family have Nike's full support."

"He is the best golfer in the world and one of the greatest athletes of his era," Nike spokeswoman Beth Gast said in the statement. "We look forward to his return to golf."

The statement did not elaborate on whether Woods' announcement would impact his business relationship with the sports equipment and clothing company, which has worked with him for more than a decade.

Woods' other sponsors include Gillette, Gatorade and Electronic Arts.

The Professional Golfers' Association Tour said it supports Woods and looks forward to his return to the game.

"We fully support Tiger's decision to step away from competitive golf to focus on his family. His priorities are where they need to be, and we will continue to respect and honor his family's request for privacy," the PGA Tour said in a statement Friday. "We look forward to Tiger's return to the PGA Tour when he determines the time is right for him."