Marijuana Mom and the Cannabis Kid 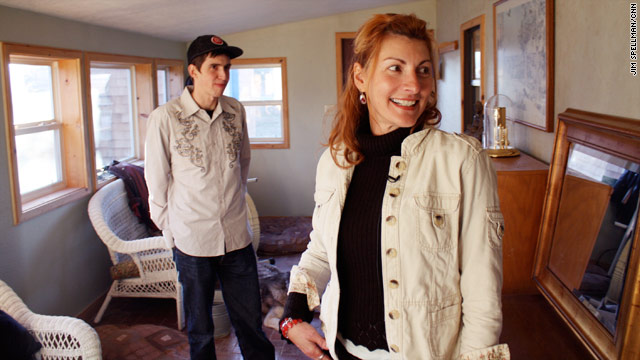 Diane Irwin describes going into the marijuana business with her son, Jason, as a "faith thing."
STORY HIGHLIGHTS

La Veta, Colorado (CNN) -- The crop has been harvested, and Diane Irwin's secret technique paid off.

"Every morning I would go out and talk to my girls," she said, "pray over them and ask them to provide good medicine."

Her "girls" are marijuana plants destined for her son Jason's medical marijuana dispensary in Denver. At 48, she has just wrapped up her first season as a pot farmer. Her 62 plants yielded 13 pounds.

Irwin spent most of her life as a hairdresser and salon owner in a Denver suburb.

"I was into makeup and high-heeled shoes and fancy clothes and working -- a lot," she said. "I sold my salon and moved down to the country. I wanted a change of pace."

While Mom was looking for a midlife career change, her son was building a medical marijuana business, legal in Colorado since 2000. Diane Irwin loaned him $10,000 from the sale of her salon, and he opened Highland Health, a dispensary where patients who have been certified by the state can buy marijuana.

Jason Irwin concedes he began his marijuana enterprise on the wrong side of the law, "just getting cheap pounds and flipping them to my friends," he said. He was working full time as an arborist and dealing pot on the side when he saw an opportunity to take his business aboveboard.

In 2008, he received state approval to open his dispensary. In March, he got a patient's card, citing chronic pain after a fender-bender. He smokes marijuana often.

The medical marijuana business has boomed in Denver during the past year. Jason Irwin's dispensary was in place early, building clientele long before many of the newcomers arrived.

He has about 200 regular patients, he said, and another 500 who come by from time to time. He employs four "bud tenders" and said he grosses about $5,000 a day.

But it's not always easy to keep the pot in stock. Though the dispensaries are legal in Colorado, the laws are vague about growing cannabis. Legislators want to clarify the regulations, but until then, the dispensaries are getting their marijuana through unconventional routes.

"The connections are underground. They're not mainstream at all," Jason Irwin said. "We can't call the growers union. There is no such thing.

"Instead of placing your order through a typical system ... you get a dude who comes down from the mountains and slaps a duffle bag on your desk. It's full of weed, and he's like 'Here, pick what you want. Do you want any?' And you've got to dig through it, inspect it for yourself, make sure it looks kosher, weigh it, pay thousands of dollars. It's all cash at this point."

Jason Irwin wanted to see those thousands of dollars stay in the family instead of going to the mountain dudes. Enter Mom.

"He called me one day and he said, 'Mom, I think we should buy this land' and 'How do you feel about growing medical marijuana?' And I said, 'OK.' It was just a faith thing."

In June, they paid $3,000 for two greenhouses, supplies and marijuana seedlings. Diane Irwin lived in an old camper and tended the plants.

"It was like an Outward Bound course for me," she said. "Living off the grid, roughing it. We didn't have heat. We didn't have running water. We didn't have electricity most of the time. The batteries were always going dead. The greenhouse blew away a couple of times."

But at least she had company: First-time marijuana farmers occupy the plots of land on both sides of the Irwin operation. The trio formed an ad hoc collective, helping each other and learning from their mistakes. They spent their days tending to their plants and their evenings grilling food along a nearby river.

One of the trio's concerns was security. Their greenhouses are visible from the road and they worry about being robbed or hassled by police. So far they have had no trouble, but if one grower needs to go into town for supplies, the others keep a watchful eye.

I'm in for the long haul. I really do feel like we're pioneers bringing new life to medical marijuana.
--Diane Irwin on growing marijuana with her son
RELATED TOPICS

By early November, the plants were ready to harvest. The Irwins filled several SUVs and pickup trucks with their crop and moved to a house they rented in nearby La Veta.

A closet in the house is filled with marijuana that is drying out. The radio is set to NPR as Diane Irwin's fellow farmers trim the stems and leaves off the plants. The leftover twigs are run through a screen to form a powder that is packed by hand to form hashish.

With only a few pounds left to process, Diane Irwin is already looking forward to next year. She hopes to triple their harvest.

"I'm in for the long haul. I really do feel like we're pioneers bringing new life to medical marijuana," she said.

Diane Irwin got her patient card in May before starting the farm, also citing chronic pain. She rarely uses medical marijuana. Jason Irwin said that until the state better defines its law, he thinks it's wise for everyone in the business to have a patient card in case authorities question them while in possession of marijuana.

Colorado is one of 14 states that has legalized medical marijuana. Federal law still bans its use. But the Justice Department recently announced it would no longer seek to prosecute people using, prescribing or distributing marijuana for medical purposes as long as they're in compliance with local laws.

Jason Irwin wants to expand his operation based on the models of the two businesses he most admires: Whole Foods and Starbucks.

"We hope to develop a business model that proves to be successful, that we can expand upon, hopefully to other states and communities, become like a really reliable consistent supplier of safe, tested cannabis," he said.

For Diane Irwin, her new life in business with her son hasn't quite set in.

"It wasn't something I ever dreamed I would be involved in, " she said.

When her son was growing up, she adds, "I used to bust him all the time for marijuana. I used to flush it down the toilet."