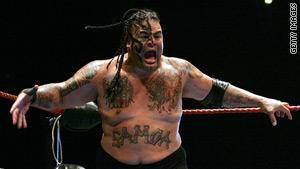 Known as "The Samoan Bulldozer," Edward Fatu was a member of the Anoa'i wrestling family.
STORY HIGHLIGHTS
RELATED TOPICS

Born in American Samoa, Fatu, 36, was a member of the famous Anoa'i wrestling family, which includes cousin Dwayne "The Rock" Johnson, his two uncles, who wrestled as The Wild Samoans in the 1980s, and brothers, Sam "Tonga Kid" and Solofa Jr. "Rikishi," according to Wrestlers Rescue, a support group for retired professional wrestlers.

The two-time WWE Intercontinental champion, also known as "The Samoan Bulldozer," squared off with the likes of Triple H, John Cena and Ric Flair before the WWE terminated his contract in June for having violated the WWE's Wellness Program and refusing to enter rehab, the WWE said on its site.

The organization offered its condolences to his family in a brief statement on its site.

To friends and family, Fatu was a devoted father who was looking forward to spending more time with his children after leaving the WWE.

"He had his demons, but he found a lot of strength in his family," said Dawn Marie Psaltis, family friend and founder of Wrestlers Rescue. "He was always a jokester, he was always playing a practical joke on someone. He comes from a long line of professional wrestlers and did his family proud."