New York (CNN) -- Former NBC News anchor Tom Brokaw and his wife were involved in a three-vehicle accident Friday in which one person died, a network spokeswoman said.

The accident happened about 1 p.m. on New York's Bruckner Expressway in the Bronx, spokeswoman Jenny Tartikoff said in a statement.

Brokaw and his wife, Meredith, were not injured, she said.

The accident occurred when an SUV swerved to avoid a spool of wire that had fallen from a truck and slammed into a 7-ton U.S. postal truck, said Peter Rendina, a spokesman for the U.S. Postal Inspection Service.

Brokaw, who was driving behind the postal truck, hit the rear of the truck, Rendina said. 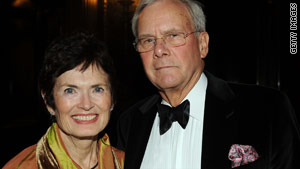 Former NBC News anchor Tom Brokaw and his wife, Meredith, were not injured in the accident.

The driver of the SUV was thrown from her vehicle and killed, according to Rendina.

The newsman and his wife waited at the crash scene until postal inspectors arrived, Rendina said.

"According to our inspectors, Brokaw did nothing wrong, just in the wrong place at the wrong time," he said.

"Tom and Meredith are greatly saddened by this loss of life," the Brokaw statement said.

New York police confirmed that one person was killed in an accident on the expressway involving an SUV, a postal truck and a possible third vehicle. No other details were released.