(CNN) -- Golfer Tiger Woods apologized Wednesday for "transgressions" that let his family down -- the same day a gossip magazine published a report alleging he had an affair.

"I have let my family down and I regret those transgressions with all of my heart. I have not been true to my values and the behavior my family deserves," he said in a statement on his official Web site.

Woods did not admit to an affair and offered no details about the "transgressions" in his statement.

"I am not without faults and I am far short of perfect. I am dealing with my behavior and personal failings behind closed doors with my family. Those feelings should be shared by us alone." 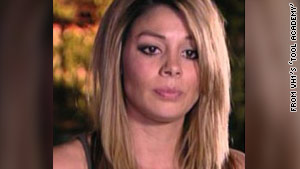 US Weekly magazine printed a report Wednesday alleging that Woods had an affair with Jaimee Grubbs, whom it identified as a 24-year-old cocktail waitress. The magazine also published what it says is a voice mail message from Woods to Grubbs.

"Hey, it's Tiger," a man says in the recording. "I need you to do me a huge favor. Can you please take your name off your phone? My wife went through my phone and may be calling you.

"So if you can, please take your name off that. ... What do you call it? Just have it as a number on the voice mail. Just have it as your telephone number. That's it, OK? You got to do this for me. Huge. Quickly. All right. Bye."

CNN could not independently confirm that the voice on the recording was Woods.

Attention has been focused on Woods since he crashed his SUV outside his Florida home last week. Investigators say he crashed the vehicle into a fire hydrant and tree. Woods was not required to talk to police about the wreck, and declined to talk with investigators on several occasions. What do you think about the whole Tiger saga?

Woods' attorney, Mark Nejame, declined to comment on reports of an affair Tuesday night, saying he was hired to represent Woods in the traffic case.

The Florida Highway Patrol said Tuesday that it cited Woods for careless driving -- the golfer paid a $164 fine -- and closed its investigation.

The golfer said Wednesday that he was "dismayed to realize the full extent of what tabloid scrutiny really means" for him, his wife, model Elin Nordegren, and their children -- a 2-year old daughter, Sam, and a 9-month old son, Charlie.

"For the last week, my family and I have been hounded to expose intimate details of our personal lives. The stories in particular that physical violence played any role in the car accident were utterly false and malicious. Elin has always done more to support our family and shown more grace than anyone could possibly expect. "

The 33-year-old golf phenomenon has won the Masters tournament and the PGA tournament each four times, as well as three U.S. Open titles.

Grubbs is the second woman to be romantically linked to Woods through news reports this week.

The National Enquirer reported a few days before Woods' crash that the golfer was having an affair with a New York nightclub hostess -- an assertion the hostess vigorously denied Tuesday, according to The New York Post. The woman said a disgruntled acquaintance sold the story to the supermarket tabloid and that "not a word of it is true."

See what people are saying

Asked whether the allegations might scare off Woods' sponsors, Merlis said, "If I were a businessman contemplating doing a really expensive endorsement deal with him, I would think twice."

Nike, Gatorade, Gillette and other sponsors said Wednesday they would continue their relationships with Woods.