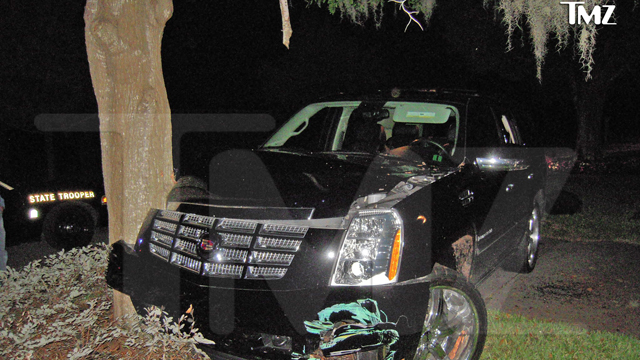 Los Angeles, California (CNN) -- Tiger Woods has canceled plans to attend his own golf tournament in southern California because of injuries he suffered near his Florida home early Friday, the pro golfer said in a statement Monday.

"I am extremely disappointed that I will not be at my tournament this week," Woods said of the Chevron World Challenge in Thousand Oaks, California. "I am certain it will be an outstanding event and I'm very sorry that I can't be there."

He also canceled a Tuesday news conference for the start of the tournament, which helps raise money for Tiger Woods Foundation programs.

Woods suffered minor injuries in a vehicle accident early Friday in his luxury neighborhood near Orlando, Florida, according to a police accident report.

State police in Florida said Monday an investigation of the single-vehicle crash "is ongoing and charges are pending."

"Woods will not participate in any other tournaments in 2009 and will return to action next year," the statement said.

The Chevron World Challenge will go on despite the absence of its host, said Greg McLaughlin, president of Woods' foundation.

"We support Tiger's decision and are confident the strong field and excellent course will provide an exciting week of competition at the Chevron World Challenge," McLaughlin said.

In a statement issued Sunday afternoon on his Web site, Woods offered no details of his wreck except to say he had cuts and bruises and was "pretty sore."

According to a police report, Woods pulled out of his driveway about 2:25 a.m. Friday in a 2009 Cadillac SUV and struck a fire hydrant, then a tree.

Authorities have said they don't have details on why Woods was driving away from his home at such an early hour, but a police report said the wreck was not alcohol-related.

"We have been informed by the Florida Highway Patrol that further discussion with them is both voluntary and optional," said Woods' agent Mark Steinberg, in a written statement. "Although Tiger realizes that there is a great deal of public curiosity, it has been conveyed to FHP that he simply has nothing more to add and wishes to protect the privacy of his family."

Under Florida law, Woods must show his license, registration and proof of insurance to police, but is not obligated to give a statement on the crash. His attorney Mark NeJame handed over the required documents to the troopers Sunday at Woods' home, Montes said.

Opinion: Tiger Woods is only human

NeJame told CNN he stood by Woods' statement and had no further comment.

"If we're unable to meet with him, we'll move on with our investigation," Montes said. But she called the delays "very unusual, because it's such a minor accident."

Last week, a story in the National Enquirer alleged that Woods has been seeing a New York nightclub hostess. The Associated Press contacted the woman and reported she denied having an affair with Woods.

The 33-year-old golf phenomenon has won the Masters tournament and the PGA tournament each four times, as well as three U.S. Open Championships.

Investigators had sought possible surveillance tapes of the wreck from neighbors, but none were found, she said.

Toobin: Why Tiger Woods may not be talking

In his Sunday statement, Woods praised his wife Elin Nordegren, saying she "acted courageously when she saw I was hurt and in trouble." Nordegren told police she used a golf club to break out the rear window of the vehicle, then pulled Woods from the SUV after she heard the accident from inside their home.

"This is a private matter, and I want to keep it that way." "The only person responsible for the accident is me," he said.