White House policy: No letter to families of military suicides 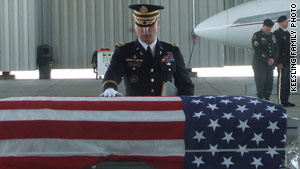 Spc. Chancellor Keesling was given almost all the honors afforded a fallen service member after killing himself in June.
STORY HIGHLIGHTS

Washington (CNN) -- Gregg Keesling chooses his words carefully when he talks about the death of his son, Spc. Chancellor Keesling.

As far as he's concerned, the soldier didn't "take his own life" or "commit suicide."

His son "died by suicide," Keesling insists -- and he has his reasons why.

When 25-year old Chancellor Keesling shot himself in Iraq on June 19, his family received much support from the military and local officials. Gregg Keesling's son was given the honor afforded to a fallen service member.

The Keesling family went to Dover Air Force Base in Delaware to watch as his body was flown back to Indiana six days later. At his burial, seven rifles fired three times each, in true military tradition.

Later, the soldier's aunt created a memorial wall in the family's Indianapolis living room. On the wall hangs Spc. Keesling's uniform, the U.S. flag that was handed to his mother, Jannett, after the service and the Indianapolis flag that flew over the state Capitol in his honor.

Yet there's an empty spot on the wall for an honor that never arrived: a letter from the president.

Gregg Keesling wanted to know why, especially after hearing President Obama talk about how he struggled to write letters to the families of each and every soldier killed in the war.

After pressing for an answer, the family found out the truth: There would be no condolence letter.

It's a matter of policy dating to the Clinton era, according to the White House. The commander in chief sends such letters to the families of troops who have died in combat, but not if they committed suicide, Gregg was told.

The policy felt wrong to Gregg and Jannett Keesling. Their son was a hero, and his country should be proud of him, they said. So Gregg Keesling wrote to Obama and Army Chief of Staff Gen. George W. Casey Jr., imploring them to rethink the policy.

"The recognition of the president could have profound impact on the family of the suicide victim," Keesling wrote in August.

Read the letters to President Obama

"The lack of acknowledgment and condolences from the President, who our family admires greatly, leaves us with an emotional vacuum and a feeling that we his family have somehow [made] less of a sacrifice," he wrote in another letter to Casey.

A White House spokesman said the administration is reviewing the "inherited" policy.

"The President's thoughts and prayers are with every military family who has lost a loved one in service to our country. As Commander-in-Chief, he has worked with Secretary Gates and Admiral Mullen to address the mental health needs of our service members," spokesman Tommy Vietor wrote in an e-mail.

Spc. Keesling completed two tours of duty in Iraq. When he enlisted in 2003, the family struggled with his decision. But the young soldier was convinced that he made the right decision, telling his family, "We must have a military, and somebody's got to be in it."

Before he deployed 2005, he was anxious but excited, his mother remembered.

However, toward the end of his deployment, the stress of a failing marriage and the shock of war "began to wear on him terribly," Gregg Keesling said.

In anger, he threw his wedding ring into the Tigris River, his parents said. He was put under suicide watch, and his ammunition was taken away for several days.

At home, though, he was "back to his old self," his father said, adding that his son found a job at FedEx and a new girlfriend.

He was treated at the Veterans Affairs clinic for a shoulder injury and burn he suffered during his deployment. His parents assumed he was being treated for everything he needed.

In 2009, he received new deployment orders . His family suggested that he move to his mother's native Jamaica to avoid service, but the soldier insisted that it was his obligation to see it through, his parents said.

When Keesling deployed again, this time as a reservist, he wasn't with his original comrades. Instead, he and 10 other Indiana reserves shipped off with a 300-member unit from Tennessee, with just two months of training together.

His mental health records were not passed on either, leaving Spc. Keesling to share his past problems with his unit if he so chose. He never did.

"I understand that, but it is a very big burden to put on a soldier to self-identify," Gregg Keesling said.

In e-mails to his family, Spc. Keesling wrote about how distant he felt from his new brothers in arms.

"I hate going to war with people I don't know," he said to his father.

Gregg Keesling said his son struggled with members of his unit who joked about troops who committed suicide, oblivious to his struggles.

It became too much to bear.

After a long-distance fight with his girlfriend, the soldier said in an e-mail that he wanted to shoot himself.

After several phone calls, Spc. Keesling told his mother that he would talk to the Army chaplain.

He never did. Instead, 12 hours after that e-mail, he went into a latrine and shot himself.

The family believes that his suicide was brought on by the stress of war and the distance from loved ones. To them, it is death by injury like any other incident.

"He died by suicide," Gregg said. "He just had an injury that we just did not recognize."

And that's why they want a letter from the president.

"We don't want to force the president to write a letter of condolence. We hope he would want to," Gregg said. "We hope the president of the United States would want to show the appreciation to a family like ours for the sacrifice we made in allowing our son to become a soldier and defend his country."