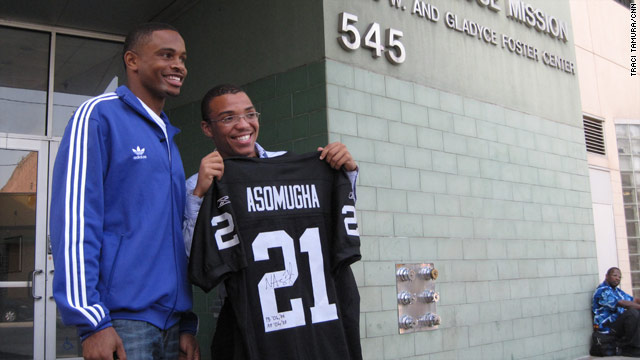 Los Angeles, California (CNN) -- The high school honor student and the NFL's highest-paid defensive back stroll down the destitute streets of Skid Row.

"I can sell you something right quick," a drug dealer hisses.

Another shouts, "Gonna whoop your ass!" More expletives are hurled.

Seventeen-year-old Kenneth Chancey is giving a tour to Nnamdi Asomugha, showing the NFL star the streets that he and his sister used to walk to get to school while living in a Skid Row homeless shelter. Prostitutes, addicts and drug dealers scatter. "Camera! Camera!" they shout.

The two make it safely past the park, one of the roughest areas of Los Angeles. An orange soda whizzes through the air, nearly hitting the teen and the Oakland Raiders' All-Pro cornerback worth $45 million.

"Wow," the teen says. "I'm sure they watch you every Sunday, and they don't even recognize who you are."

It is Kenneth's inner strength and his love for education that have brought together this high school class president and NFL star.

"The thing I took away is how fearless he is," Asomugha said later. "The things he's been through are so big and so severe -- they were threatening our lives and throwing things at us on Skid Row. But it doesn't bother him.

Even while Kenneth lived on Skid Row, he dreamed of attending Harvard to become a neurosurgeon. When Asomugha saw Kenneth's story on CNN, he wanted to help. He runs a foundation, the Asomugha College Tour for Scholars, that takes talented inner-city kids on tours of college campuses they otherwise would never be able to see. He's helped get 25 teens into college over the last four years.

On this day, he's come to tell Kenneth that he will be among the 16 students traveling in the spring to visit schools in Washington, D.C.

"I'm thankful to be able to give back," Asomugha said.

Hours before the Skid Row tour, Asomugha traveled to Hollywood's Helen Bernstein High School, where Kenneth is a starting running back in his senior year. They met at the school's football stadium, where Asomugha told Kenneth in person.

I just try to keep my head up, to look into the future.
--Kenneth Chancey

"This smile on my face," Kenneth said, "is a freaking good thing. This is awesome!"

Asomugha leaned closer. "You know who we're working on now?"

"We have to," the NFL star replied.

His father, Gordon Costello, joined in and handed a folded paper to Asomugha. The proud dad didn't show off football awards or his son's athletic achievements. Instead, it's Kenneth's latest report card, straight A's.

"He might overqualify for the tour," Asomugha said as he studied the report card. "This shows someone with a lot of drive and ambition. These are some great grades."

"I'm at a loss for words," the teen said. "Stuff like this doesn't happen every day."

Asomugha came from a family where education was stressed from day one. He remembers asking his mom as a boy, "Can I have some ice cream?"

"No," she responded. "You haven't finished your homework."

Asomugha's sister is a pediatrician, his mother holds a doctorate. Two other siblings have secondary degrees.

"I am the least educated in my family," Asomugha said. "I catch a lot of heat from my family."

The football star, who is the highest-paid defensive back in NFL history, has a degree in finance from the University of California-Berkeley.

Kenneth is energized. "I'm going to be the first one in my family to get a secondary education," he told Asomugha.

Kenneth spent his sixth-grade year living in a van with his mother and stepfather. His sister once was beaten up by someone who wanted her shirt. Kenneth was held up at gunpoint for his laptop. He refused to hand it over because his grandmother bought it for him.

"If you're going to shoot me, shoot me now," he told the would-be thief.

Mantra: Always keep your head up

From February to August of this year, Kenneth lived at the Union Rescue Mission homeless shelter along Skid Row with his father and sister. After the CNN piece aired, his friend invited him and his sister, Stephanie, to stay with his family, while Kenneth's father looked for work.

Outside Kenneth's earshot, the NFL star talked about how the teen is an inspiration, doing all the right things to achieve greatness in life.

"You don't hear about guys like Kenneth," Asomugha said. "When you have your back against the wall and you're trying to fight and there are so many things -- so many obstacles -- against you but you're still keeping your head above the water like he's doing ... the sky's the limit."

Kenneth says he constantly thought about dropping out to get a job to help his father financially. His dad would have none of it.

"Your education will pay off in the long run," his father always told him.

On the tour at Skid Row, Kenneth took Asomugha to the shelter's rooftop. It's a million-dollar view of the Los Angeles skyline. It's where Kenneth studied. It's also where he learned his biggest lesson: to always keep his head up.

The student and the football player leaned over the building's ledge. Down below, drug deals were being made.

"Anytime you look down over the ledge, you start to see the negative," Asomugha said. "When you keep your head up, you're seeing all the positive. Was that your mantra?"

The teen smiled. "That's how you do it in life," Kenneth said. "I just try to keep my head up, to look into the future."

Five years from now, he'll be graduating from college. The hell of Skid Row will be a distant memory.

"Once I succeed," he said, "I will be able to help other people."