Lincoln letter to schoolboy sells for $60,000 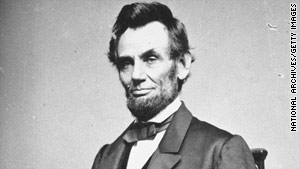 President Lincoln responded to an Illinois boy's letter about two weeks after his 1861 inauguration.

(CNN) -- Less than a month before the Civil War's start, a newly inaugurated President Lincoln took time from his frantic schedule to write to an Illinois boy whose classmates didn't believe he'd met the president.

A company that buys and sells historic documents sold the letter for $60,000 to a private collector and Civil War buff. The Raab Collection in Philadelphia, Pennsylvania, originally purchased the note from another collector, said Nathan Raab, the company's vice president.

The buyer, who lives on the East Coast, asked that he not be identified.

"He's a collector and loves Lincoln and was attracted to the human interest side of the story," Raab said.

The letter appears to be the only one Lincoln wrote to a child while in office that survives as an original document, he said.

"There was a letter sent to youngsters Clara and Julia Brown, the original of which has been lost, and this letter to young [George] Patten," Raab said. The letter to the Browns also was written while Lincoln was president.

Patten, who was about 8, had proudly informed his classmates and teacher that he had met Lincoln, but they laughed at him and were so skeptical that his teacher wrote the president in an attempt to verify what her student said.

Lincoln responded directly to the boy from the White House on March 19, 1861, about two weeks after his inauguration.

"To Whom it may concern, I did see and talk with master George Evans Patten, last May, at Springfield, Illinois. Respectfully, A Lincoln."

Lincoln historian Harold Holzer said he was amused at the president's stilted response, which reflected his training as a lawyer.

"It's a nice, new find," said Holzer, who has written or edited 34 books on Lincoln and the Civil War.

As Lincoln wrote the note the following year, he faced a raft of national crises: several Southern states had seceded and the Confederacy had been formed. On April 12, the Civil War began.

Raab said the sale attracted much attention from private collectors and institutions.

"He is widely admired by most Americans," he said. "It's such a warm story."

Holzer said Lincoln had a "soft spot for young people" and is known to have written to other young fans.

Perhaps the most famous, Holzer said, was the pre-election letter he wrote to 11-year-old Grace Bedell in October 1860 in response to her note, recommending that he grow a beard to make himself more attractive.

"I have got 4 brother's and part of them will vote for you any way and if you will let your whiskers grow I will try and get the rest of them to vote for you you would look a great deal better for your face is so thin. All the ladies like whiskers and they would tease their husband's to vote for you and then you would be President," Grace wrote.

Lincoln wrote back that people likely would believe a beard to be a "silly affection," but less than a month later he took her advice, said Holzer, co-chairman of the U.S. Lincoln Bicentennial Commission.

Grace was thrilled to receive the letter from Lincoln, which she apparently opened on a snowy day, causing the ink to run. The president later met Grace in her hometown of Westfield, New York, and gave her a kiss, Holzer said.

"He seems to have taken time out to write things like that. ... It's a perfectly charming example of that interest in young people," Holzer said.

Lincoln also wrote a letter of encouragement in 1860 to George Latham, a close friend of his son, Robert. Latham had failed a test for entry to Harvard.

"I have scarcely felt greater pain in my life than on learning yesterday from Bob's letter, that you failed to enter Harvard University," Lincoln wrote.

He told Latham he would receive another opportunity, and he should seize it and be determined to succeed.

Lincoln also addressed a few letters to adults relating to children, Raab said. For instance, he sent a letter to Mrs. Horace Mann that she was to read to her schoolchildren. That letter recently sold at auction for more than $3 million.