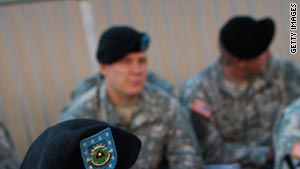 The number of suicides in the Army so far this year have topped the number from 2008.
STORY HIGHLIGHTS

Washington (CNN) -- Suicides among soldiers this year have topped last year's record-breaking numbers, but Army officials maintain a recent trend downward could mean the service is making headway on its programs designed to reduce the problem, Army officials said Tuesday.

Since January, 140 active-duty soldiers have killed themselves while another 71 Army Reserve and National Guard soldiers killed themselves in the same time period, totaling 211 as of Tuesday, Gen. Peter Chiarelli, U.S. Army vice chief of staff, told reporters at a briefing Tuesday. But he said the monthly numbers are starting to slow down as the year nears its end.

"This is horrible, and I do not want to downplay the significance of these numbers in any way," Chiarelli said.

For all of 2008, the Army said 140 active-duty soldiers killed themselves while 57 Guard and Reserve soldiers committed suicide, totaling 197, according to Army statistics.

The Army is still trying to tackle why soldiers are killing themselves.

"We still haven't found any statistically significant causal linkage that would allow us to effectively predict human behavior. The reality is, there is no simple answer -- each suicide case is as unique as the individuals themselves," Chiarelli said.

He also said there were troubling new statistics showing an increase in suicide rates among young soldiers who have never deployed, another factor puzzling Army researchers.

To add to the Army's problems, Chiarelli said there is a rise in numbers of soldiers abusing prescription drugs and alcohol upon returning from the war zones.

But Chiarelli said the news was not all grim.

"I do believe we are finally beginning to see progress being made," he said referring to a downward trend in suicide numbers in recent months. "The general trend line with the exception of a couple of months has been down."

"We attribute this reduction in the number of suicides to the many actions we have taken since February to inform and educate leaders and soldiers on this important issue," Chiarelli said.

Since March, the Army has implemented numerous programs and policies in an attempt to quickly slow the rate. Programs range from a suicide prevention task force to a day off from official duties to focus on suicide prevention. The service has implemented what it calls a Comprehensive Soldier Fitness Program, giving every soldier a mental assessment twice a year in the same style the Army tests soldiers for fitness.

"It gives the same emphasis to psychological, emotional and mental strength that we have previously given to physical strength," Chiarelli said.

Chiarelli said the initial results were promising, and doctors said they could have great success treating patients online.

The test seems to give the Army some answers on how to treat the variety of soldiers from young to old.

"Younger soldiers prefer the online method of evaluation more than they do the face-to-face, and older soldiers -- some of you might not find this so surprising -- find face-to-face more to their liking," according to the general.

Chiarelli also gave examples of Army bases that seem to have shown improvement in suicide warning signs and prevention this year resulting in decreased number of suicide rates, including Fort Hood in Texas, Fort Bragg in North Carolina and Fort Drum in New York.

There are Army posts, however, that were not showing signs of improvement.

"We are very concerned with the increase this year of suicide at Fort Campbell, Fort Stewart and Schofield Barracks," Chiarelli said.

Fort Campbell, in Kentucky, has had 18 suicides so far this year, with 11 of them occurring in the first quarter of 2009. Fort Stewart in Georgia has had 10 deaths, six of them occurring over the first five months of the year. And Schofield Barracks in Hawaii has had seven deaths.

All of the bases Chiarelli mentioned have different populations and deployment levels and reflect different suicide rates and ratios.

Chiarelli stressed his frustration with getting answers to the suicide problem.

"Everywhere I try to cut this and look at it to try to find out what the causal effect is, I get thwarted. And that's why we think that we've got to look in its totality at a whole bunch of different issues, and it's going to take time," he said.