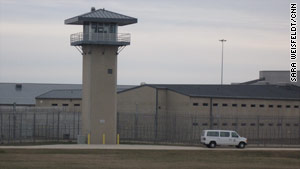 Thomson Correctional Center, about 150 miles west of Chicago, is the top contender to house Gitmo detainees.

Officials from the department of Defense, Justice and Homeland Security and federal Bureau of Prisons will be will be visiting the maximum-security Thomson Correctional Center, about 150 miles west of Chicago, on Monday, the officials said.

Earlier Saturday, a statement from Illinois Gov. Pat Quinn's office said senior Obama administration officials would be visiting the Thomson prison to see whether the "virtually vacant, state of the art facility" could be of use to the Bureau of Prisons.

The statement didn't mention the space possibly being utilized for Guantanamo detainees, but said that overcrowding is a "serious issue and one of the reasons why the Bureau of Prisons is interested in viewing Thomson Correction Center."

Quinn, whose administration hopes to generate jobs and economic growth in Thomson through the prison, was scheduled to speak on the visit Monday.

If the Bureau of Prisons purchases the 1,600-cell site, it would operate primarily as a federal prison and lease a portion of it to the Defense Department to house a limited number of Guantanamo detainees, one Obama administration official said.

There are about 215 men held by the U.S. military at the Guantanamo prison camp. Among the detainees are five suspects with alleged ties to the 9/11 conspiracy, including accused mastermind Khalid Sheikh Mohammed, who will be transferred to New York to go on trial in civilian court, Attorney General Eric Holder announced Friday.

As part of the conversion at Thomson, the same Obama official added, the Bureau of Prisons and Defense Department would enhance security measures to exceed those of the nation's only supermax prison -- the U.S. Penitentiary Administrative Maximum Facility in Florence, Colorado. No inmate has ever escaped from the prison.

The likelihood of Thomson being tapped to house Guantanamo detainees was first reported by the Chicago Tribune on Saturday, and sparked immediate concern from critics of the Obama administration.

As home to Chicago's Willis (formerly Sears) Tower -- the nation's tallest building -- "we should not invite Al Qaeda to make Illinois its number one target," said the statement by Kirk, who is running for the same Senate seat once held by Obama.

"The United States spent more than $50 million to build the Guantanamo Bay detention facility to keep terrorists away from U.S. soil. Al Qaeda terrorists should stay where they cannot endanger American citizens."

The Obama administration has vowed to close the Guantanamo facility, but acknowledges it is unlikely to happen by its self-imposed January 22, 2010, deadline.

However, one of the two Obama administration officials speaking to CNN Saturday said that, coupled with the announced transfer of the alleged 9/11 conspirator, the likely developments at the Thomson prison are "good progress" toward closing the Guantanamo site.

Of the total number, 35 inmates are housed in federal prisons in Illinois, including Ali al-Marri, who pleaded guilty in federal court to conspiring to provide material support to al Qaeda. Al-Marri is serving eight years and four months at the federal penitentiary in Marion, Illinois.