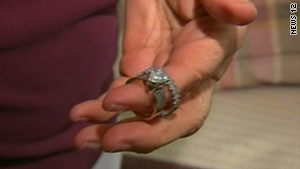 A man, along with a sanitation crew, sifted through tons of trash to find the wedding rings he accidentally tossed.
STORY HIGHLIGHTS

New York (CNN) -- A Morris Plains, New Jersey, woman got an early birthday present on Monday when local sanitation workers found her wedding and engagement rings after sifting through 10 tons of garbage.

Bridget Pericolo, who will be 78 in December, told CNN that her husband, Angelo Pericolo, 78, had inadvertently thrown away a cup that she had put her rings in, thinking it was garbage.

"I looked for the cup, it was gone," she said. "I called Angelo and asked him where the cup was, he said, 'Oh my God, I threw it out.'" Pericolo told CNN affiliate WPIX.

After the couple discovered that the cup had been trashed, Bridget Pericolo called up the local sanitation department. Supervisor Michael Brotons told her that the drivers of the truck that held her garbage couldn't reach that specific black bag while on their route.

Brotons told her to ask her husband to meet the drivers at the transfer station at the end of the day and they'd sift through the garbage.

About 1 p.m., the drivers, Edgar Lopez and Joseph McGee, as well as Angelo Pericolo, went to work to find the bag with the ring, Brotons and

"We dumped the truck, which had about 10 tons of garbage on it," Brotons told CNN.

Bridget Pericolo was waiting in the car at the transfer station during the search. She said she had almost given up hope after about 45 minutes of waiting.

"I thought maybe he couldn't find it," she said.

But after about 50 minutes, her husband came back -- "I was knee-deep in garbage," she said he told her, bearing the rings that represented their 55 years of marriage.

"You had to see the expression on their faces when we found it," Brotons said. "They couldn't believe that we found it, and they didn't know what to say, really. They didn't have to say anything."

"It really was a miracle," Bridget Pericolo said.