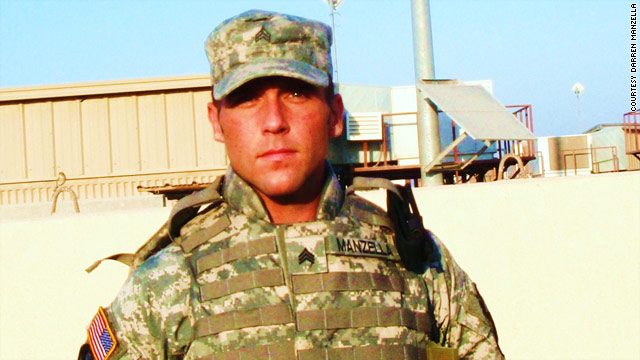 (CNN) -- Darren Manzella saw two tours of duty in Iraq, first as a combat medic and later as a liaison officer. He earned three promotions in his six years as a U.S. Army sergeant.

Despite his professional success, Manzella says he began to question his personal life.

"After returning from my first deployment in Iraq, after seeing death and violence, losing friends and comrades, it really made me look over my life," he said. "I looked at some issues I had always had trouble with. I had debated, 'Am I gay?' "

As he struggled with his sexual identity, Manzella began a relationship with a man. Soon after, while in Texas between tours, Manzella said he began receiving anonymous, harassing e-mails and telephone calls.

"They told me, 'You are stupid, the Army is going to kick you out, but before they do, they are going to take your rank away and all your money away.' "

Manzella describes this time as one of fear and deep insecurity.

"I didn't know if the military police would be coming through the door to take me away because someone had reported me," he said. "This was some of the paranoia I was living with every day."

Manzella says that the e-mails and calls went on for months and that after many sleepless nights, he decided to ask his supervisor for help.

"He listened and was somewhat sympathetic," Manzella said. "He told me not to worry, to try and get some rest, to go home early and see him in the morning."

By the next morning, Manzella's supervisor had reported him as having broken the law under "don't ask, don't tell," the 1993 policy that prohibits anyone who "demonstrate(s) a propensity or intent to engage in homosexual acts" from serving in the U.S. military.

Manzella said he was read his rights and told that he would be investigated, but that he could continue working. As the investigation proceeded, word spread that Manzella was gay.

"Ironically, it pulled the unit together. A lot of them started to invite me out," Manzella said. "My co-worker was getting married; she told me that my boyfriend and I were invited to the wedding. It made me feel like I was more a part of the family."

After a month, Manzella said he was told that no proof of homosexuality had been found and that the investigation was being closed, even though he told his supervisor about his lifestyle. Manzella was hopeful.

"I thought it was a big step when they told me that they were going to retain me," he said.

In 2006, Manzella's unit was sent back to Iraq, and he served his 15-month deployment with his unit knowing he was gay.

"I could have pictures of my boyfriend out, I could talk freely on the phone without having to worry about someone overhearing me and reporting me," he said.

During his tour, Manzella was contacted by the Servicemembers Legal Defense Network, a national nonprofit offering legal assistance to those affected by don't ask, don't tell. SLDN told him that a television network was looking for a gay serviceman in a combat zone to tell his story.

After weighing the risk of being discharged for speaking out publicly, Manzella agreed to the interview. He said he was motivated by the knowledge that he could give a voice to the gays, lesbians and bisexuals serving in the military -- a number estimated at 65,000 by the Palm Center at the University of California, Santa Barbara, which researches sexual minorities in the military.

The network television segment aired a few days before Manzella returned from Iraq, and it seemed at first that his interview would not have consequences. He returned to the States, spent time with his family and even went to Capitol Hill to lobby against don't ask, don't tell.

Manzella returned to duty at Fort Hood, Texas, in December 2007 and continued to serve for almost seven months. In the first week of March 2008, he was given orders to report to Fort Drum, New York, to work at the military hospital there.

A week later, he said, his company commander called him in.

"I was told I was going to be discharged under don't ask, don't tell," he said. "Up until that point, I hadn't heard anything. I had lived openly for nearly two years. I thought that was a huge step forward, that finally people were being recognized on their performance and how well they served their country and their comrades and peers."

Since don't ask, don't tell was introduced, the military has discharged more than 13,000 lesbians, gays and bisexuals, according to the Servicemembers Legal Defense Network. A 2005 government report found that about 800 of them had skills deemed "critical," such as engineering and linguistics, and that it cost the military about $200 million to recruit and train their replacements.

Garver said the continued enforcement of don't ask, don't tell is simply a case of the Army enforcing the law.