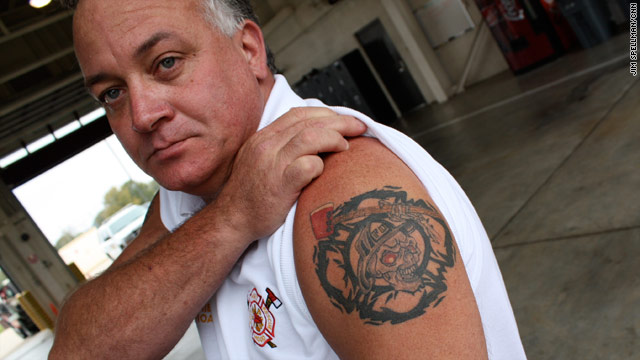 Fire chief Billy Rhoads displays his tattoo of brotherhood. "I just could not fathom what we were going to encounter."
STORY HIGHLIGHTS

Fort Hood, Texas (CNN) -- The call came over the radio. "Shots fired." And then, even worse: "Officer down."

Billy Rhoads, chief of the Fort Hood Fire Department, grabbed a radio and donned his flak jacket. He jumped into his SUV and tore down the road. A dozen or so blocks away, at the Soldier Readiness Center, a gunman had opened fire on soldiers.

Rhoads stepped from his truck. His department's motto is "Protecting those who protect us." He hoped he was not too late for that.

The scene was chaotic. Wounded and dead soldiers were everywhere.

"I was listening to people hollering for help, and I was trying to get in there to see what we had," Rhoads recalled three days after the November 5 attack. "I assumed that we would have maybe several victims. I had no idea, I just could not fathom what we were going to encounter."

Amid all the army uniforms, one dark blue uniform stuck out.

"I broke and ran over to her," Rhoads said. "I got over to her and began trying to talk to her."

Rhoads and Munley had worked closely in the past. He considers her a friend.

Army medics had fashioned a makeshift tourniquet on her leg. He bent down to comfort her. She was extremely weak and unable to speak loudly.

"I just kept reminding her of her daughter and that she needed to stay with us for the baby's sake," he said. "She's a very tough cookie."

Munley, 34, had served in the Army herself before becoming a police officer at Fort Hood. Her husband is a staff sergeant in the Army, and their daughter is 3 years old.

Munley's neighbors have said she is so tough, she stopped burglars from entering her house last year.

Said Rhoads of Munley: "The old saying that dynamite comes in small packages is very true."

Emergency personnel were flooding the scene, and helicopters were en route to evacuate the injured.

Rhoads, who began as a volunteer firefighter 26 years ago when he was just a teen, took over the scene as incident commander. But first, he paused for a quick prayer.

"I just asked the Lord to be with me, to give me the strength and the courage I need to do my job wisely and keep my people safe."

Even as the first responders worked on the dozens of wounded soldiers, they weren't certain whether there were other shooters on the post.

"The thought's always there on your mind that there could be another suspect in the area," Rhoads said.

As for Hasan, the fire chief says that discussing the shooting suspect is too emotional. "I saw the suspect from a distance, but I never got a look at him."

Rhoads' prayers remain with the soldiers he tries to keep safe. "It's very emotional for everybody when we lose our soldiers. But when we lose them here at home like this, it takes it to a different level."

He says the department has arranged for counselors to be available for the firefighters as they process all they have endured. They've received phone and text messages from fire and police departments all across the country, offering support and prayer.

But the main thing his firefighters have relied on, he says, is each other.

"Afterward, everyone started to console each other and talk to each other. It's a brotherhood."