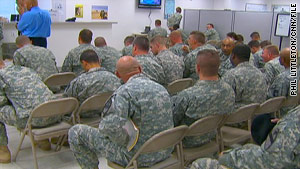 People constantly moved in and out of the Soldier Readiness Center at Fort Hood during a CNN visit in June.
STORY HIGHLIGHTS

A CNN special investigation drills down on the causes and the impact of the Fort Hood shootings, 8 p.m. ET Saturday on CNN TV.

Washington (CNN) -- I was in the building at Fort Hood, Texas, in June where 43 people were shot this week.

I was sent to Fort Hood along with CNN Pentagon correspondent Barbara Starr and videographer Phil Littleton. During our visit, we were in and out of several buildings. One of them is now a crime scene, a killing ground in the heart of one of America's largest military installations.

Col. Ben Danner was our public affairs escort. When I called him Thursday, Danner told me the shooting happened at the Soldier Readiness Center that we had visited during our trip. The purpose of our visit was to learn how Fort Hood was helping soldiers cope with stress and mental health problems. It was a high priority for the commanders there.

I grabbed the tape and disks with the video from our trip and cued up the video of the center.

It was just as I remembered -- a low, brick building. There was one main entrance. A sergeant/nurse was directing traffic as people constantly moved in and out. Once inside, the space was about the size of a basketball court. And there were lines, lines of soldiers everywhere. The lines to our right were about half a dozen soldiers deep. Those folks were standing.

To the left, about 60 or so soldiers were waiting in another line. They got to sit in metal folding chairs. But as the line moved, they moved from chair to chair. I don't think any of them got to sit in the same chair more than 30 seconds. The place looked like the Department of Motor Vehicles at lunchtime on the last Friday of the month. Only everybody was in Army camouflage fatigues.

Beyond those lines were cubicles, each one with a least one line leading into it. All these soldiers were getting paperwork stamped or signed. Or they were undergoing routine medical examinations. One area was just for vaccinations. Everyone got poked with a needle at least once.

Video: What happened at Fort Hood?

Everything was done out in the open, with only cubicle walls to keep soldiers in one line from seeing what soldiers in the other line were going through.

I was able to wander around and watch, while Barbara talked to the top officers and Phil took video of all the goings on.

I remember the only place where someone could get privacy was way in the back, a few small offices with walls and a door that could be closed. I was told that's where soldiers would be taken if a routine mental health exam indicated a more thorough one might be needed.

What I don't remember was a back door. There may have been one. I probably missed it. But the only door I remember is the one where the sergeant/nurse was directing traffic. And I've been thinking about her as the details of the shootings emerged.

And when the soldiers had gone through all the lines, there was to be no loitering by that door. She'd send them on their way.

I don't remember her exact rank. But I know she was a nurse; I asked her because she reminded me of my sister who is a nurse and also skilled at "running the show." After we were done in June, I went to her and told her that while there were plenty of captains, majors and colonels around, I could tell this was her facility. I was grateful she let us take pictures inside there that day. She gave me a quick smile and went right back to work.

As I write this, I worry about that sergeant/nurse. Since I don't remember her name, I may never know if she was there when the horror erupted. If she was working, I'm sure she would have stopped the gunman, asking him why he was there. If he was holding two guns, he may not have been able to remove his cap. She may not have had enough time to say something. I hope she did not become his first victim. Maybe she's safe and sound, at home with her loved ones.

But 43 others are not safe and sound. And all over the country, people with friends and family Army are worried about their loved ones. Was he or she in that building, stuck in line when the shooting began?