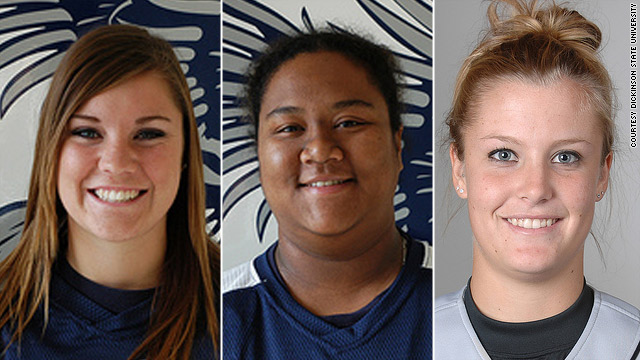 (CNN) -- Ashley Neufeld was seen a bright-smiling outfielder who ran like the wind and Kyrstin Gemar was the power hitter whose serious on-field nature might belie her heart of gold.

And Afton Williamson was the newcomer who fit right in with the tight-knit softball team, which she hoped to help push to a fourth straight national tournament, Dickinson State University Athletic Director Roger Ternes recalled Wednesday.

The three DSU friends and teammates are believed to have been stargazing together a few miles from the Dickinson, North Dakota, campus when Gemar's vehicle plunged into a stock pond on a farm Sunday night, Ternes said.

Authorities found the teammates' bodies in the submerged vehicle Tuesday. The campus has been in mourning, with classes canceled Wednesday and part of Thursday, when the school will hold a memorial service.

"It's just been devastating," Ternes said. "There's no life experiences that can prepare anyone to lose a teammate, a daughter, a sister."

Police are investigating why the vehicle went into the pond, but foul play isn't suspected. A search began late Sunday after teammates received two brief cell phone calls from the women during which they mentioned water and a lake, the university has said.

Those who knew them have been remembering the three as being devoted as much as to their friends as they were to softball.

At a campus prayer service for the three on Tuesday, team captain Sara Jane Webster told her teammates that Neufeld, Gemar and Williamson would want them to stick together as always.

"I know we've lost three of our sisters, but they would want nothing more than for us to stay close to each other and truly appreciate every second we have with one another," Webster said, according to CNN affiliate KXMB.

Neufeld, a 21-year-old senior psychology major from Brandon, Manitoba, was a key component to a team that had reached the NAIA national championship tournament for three consecutive years, Ternes said.

The outfielder was an accomplished softball player not only in college, but also for her province. She was a member of the 2005 Manitoba, Canada, women's softball team, which was managed by her mother, a Manitoba Softball Hall of Fame and Museum inductee, according to the Winnipeg (Manitoba) Free Press.

Known on the field for her speed, Neufeld was also quick with her smile, Ternes said.

"It was always a great day for her," he said. "She was one of those people who was infectious and great to be around."

Gemar, 22, was a redshirt senior entering her second year with DSU's team. She had transferred from Grossmont College in El Cajon, California, near her San Diego-area hometown.

The business major and DSU's designated hitter/third baseman was the "type of player the opponent should probably fear, because she could swing the bat," Ternes said.

The cleanup hitter had 10 home runs and a .475 batting average last season.

"She had a heart of gold and was the most pleasant young lady, but if you looked at her during the game, you might read her the wrong way," Ternes said. "When she was on the field, she was all business."

Gemar was someone teammates looked up to, said Jim Spiller, athletic director for Grossmont College.

"Her ... teammates referred to her as Mama K, and they did that because she supported them. She could lift them up with just a smile," Spiller told CNN affiliate KFMB in San Diego.

"She would never exclude anyone. She was there for anyone anytime they needed it," she told the San Diego TV station.

At Tuesday's prayer service, Gemar's father told DSU's team he was proud of her and her teammates.

Williamson, a 20-year-old junior from Lake Elsinore, California, was in her first year at DSU, having played two years at Riverside (California) Community College.

"She had it all figured out and got things done on and off the field," her Riverside coach, Michelle Daddona, said Wednesday.

Williamson, a psychology major, would have been one of DSU's starting pitchers, had an outstanding change-up and "was looked to be a key cog in our team's run to get back to the national tournament and possibly win it," Ternes said.

She was "a delight to be around" and was quick to fit in with the squad, Ternes said.

"By the time she was here a week, it was like she'd been here all her life," he said.

Williamson thought about coaching softball after college and had already given pitching lessons to girls 12 and under, Daddona said.

"There wasn't anybody she couldn't get along with. She had that ability, and an ability to push other people," Daddona said.

On Wednesday, teammates, friends and coaches visited the pond where the three died. They threw softballs and flowers into the water in their memory, The Dickinson Press reported.

"Those three, they just loved their teammates. They loved softball," DSU softball coach Kristen Fleury told the Bismarck Tribune. "They were ... great students and great girls. Their lives just went too soon."