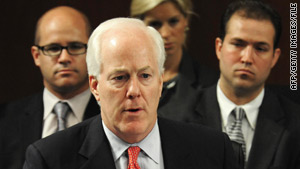 Sen. John Cornyn, R-Texas, said we must gather facts and determine how to prevent a similar tragedy.
STORY HIGHLIGHTS

"It is imperative that we take the time to gather all the facts, as it would be irresponsible to be the source of rumors or inaccurate information regarding such a horrific event," Cornyn said in a statement.

"Once we have ascertained all the facts, working with our military leaders and law enforcement officials on the ground, we can determine what exactly happened at Fort Hood today and how to prevent something like this from ever happening again," he said.

Maj. Nidal Malik Hasan, an Army psychiatrist, shot and killed 11 soldiers and one civilian, officials said. Thirty-one people were wounded, officials at the Army base said. A federal official said Hasan is a U.S. citizen of Jordanian descent.

Cornyn, a Republican, said people should not jump to conclusions about what happened and why.

"We do not yet have these details," the statement said.

President Obama, who was speaking at a conference in Washington, said his administration "will make sure that we get answers to every single question about this horrible incident."

He asked Americans to keep the soldiers and families of Fort Hood in the thoughts and prayers.

Former President George W. Bush, who was governor of Texas from 1995 to 2000 and lives in Crawford about 20 miles from the post, expressed his family's sorrow.

"I was saddened to learn of the tragic incident at Fort Hood. Laura and I are keeping the victims and their families in our thoughts and prayers during this difficult time," he said.

iReport.com: Are you there? Send pics, video

Two prominent Muslim organizations condemned the shootings. The Council on American-Islamic Relations, based in Washington, said there was no reason for such violence.

"We condemn this cowardly attack in the strongest terms possible and ask that the perpetrators be punished to the full extent of the law," a statement from the organization said. "No political or religious ideology could ever justify or excuse such wanton and indiscriminate violence."

The Muslim Public Affairs Council offered its sympathy to the victims and their families.

"MPAC and the Muslim American community unequivocally condemn this heinous incident," said a statement from the Los Angeles, California, based group. "Our entire organization extends its heartfelt condolences to the families of those killed as well as to those wounded and their loved ones."

The group said it was working with law enforcement and government officials.

"American Muslims stand with our fellow citizens in offering both prayers for the victims and sincere condolences to the families of those killed or injured," the statement said.

The Secretary of the Army said that while an investigation will come, the well-being of his soldiers was the Army's first concern.

"This is a terrible tragedy that we will know more about in the coming days. For now, our focus is squarely on taking care of our soldiers and their families," said John M. McHugh in a statement. "Our thoughts and prayers are with the families and friends of those who have been killed and wounded. The leadership at Fort Hood is marshalling the medical support and counselors necessary to take care of our soldiers and their families and to notify the next of kin."

Sen. Kay Bailey Hutchison of Texas said her heart went out to the people affected by the violence.

"Our dedicated military personnel have sacrificed so much in service to our country, and it sickens me that the men and women of Fort Hood have been subjected to this senseless, random violence," said Hutchison, a Republican.

Texas Gov. Rick Perry said the flags of his state would fly at half staff through Sunday.