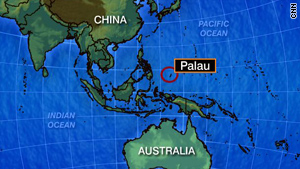 (CNN) -- Six Uyghurs who were imprisoned in the detention facility at Guantanamo Bay, Cuba, were transferred Saturday to the South Pacific island nation of Palau, the Justice Department said.

Seven Uyghurs are still at Guantanamo Bay, where 215 prisoners remain. Uyghur is an ethnic group from western China.

Since January, 25 detainees have been transferred to other countries.

The United States has coordinated with Palau "to ensure that the transfers take place under appropriate security measures and will continue to consult with the Republic of Palau regarding the individuals," the Justice Department said.

The 13 Uyghurs were accused of receiving weapons and military training in Afghanistan. Some of them have been cleared for release since 2003, and other Uyghurs have been released to other countries. The United States said it would not send them back to their homeland because of concern they would be tortured by Chinese authorities.

The Chinese government has said no returned Uyghurs would be mistreated and has repeatedly warned other countries against taking the men. Beijing officials this summer again urged the United States to hand over all remaining Uyghurs instead of sending them elsewhere.

China alleges the men are part of the East Turkestan Islamic Movement, a group the U.S. State Department considers a terrorist organization, that operates in the Xinjiang region. East Turkestan is another name for Xinjiang.

On October 20, the Supreme Court tentatively agreed to accept an appeal from the 13 Uyghurs to be released into the United States from American military custody.

CNN's Carol Cratty and Bill Mears contributed to this report.