Search continues for 9 in chilly Pacific 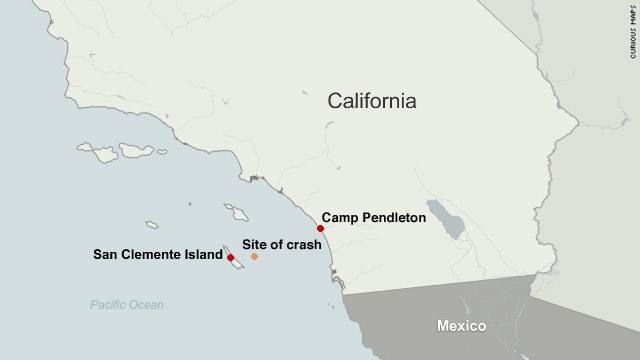 The AH-1 Cobra helicopter was based at the Marine Corps base at Camp Pendleton, about 50 miles north of San Diego.
STORY HIGHLIGHTS
RELATED TOPICS

(CNN) -- A massive search and rescue mission continued late Friday for nine people who may have plunged into chilly Pacific water off the Southern California coast after a Coast Guard plane and a Marine helicopter collided.

"We're still in the search and rescue phase. We are not standing down from that at this point," Coast Guard Capt. Thomas Farris told reporters at a news conference. "We have every hope that we'll be able to find survivors."

The search will continue, he said, "Until I stop."

The Coast Guard C-130 plane and its seven crew members had been searching for a missing person when it collided Thursday with the Marine AH-1 Cobra helicopter, with a two-person crew, on a military training exercise, Farris said.

None of the names of those on either aircraft has been released.

A pilot reported seeing a fireball about 7:10 p.m. Thursday near the crash site. The crash occurred about 16 nautical miles (18 miles) off the coast, near San Clemente Island, said Cpl. Michael Stevens of U.S. Marine Air Station Miramar in San Diego.

Castillo earlier said an investigation "to determine what exactly happened" was beginning. The investigation will be done in "lockstep" with the Marine Corps, he said.

A large debris field has been located, and debris has been collected, he said.

"The debris is what you'd expect, I think, from a midair collision," he said.

The two Marines on the Marine Corps Base Camp Pendleton chopper were one of four helicopter crews involved in the training exercise, Stevens said.

The Coast Guard plane had been on a search mission for a couple of days before Thursday's crash.

"They were searching for a possible person in the water who was reported to have gotten in a dinghy and attempted to row to Catalina [Island]," Farris said. "We were searching in that area because of the drift that would have naturally occurred after that event."

With water temperatures in the 60s, Farris earlier Friday estimated survivability could be up to 20 hours.

The missing person the Coast Guard members were searching for prior to the collision is still missing, Farris said.


CNN's Sonya Hamasaki and Larry Shaughnessy contributed to this report.