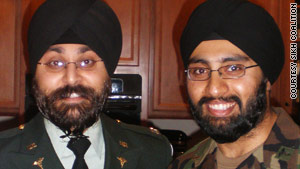 (CNN) -- The U.S Army has granted a member of a religious minority permission to keep his turban, beard and uncut hair while he serves in the military, the Pentagon and a group representing him said.

Capt. Kamaljit Singh Kalsi, a doctor, is a Sikh, a faith that calls on its adherents not to shave or cut their hair.

Kalsi filed a request in the spring for an accommodation to follow the principles of his religion. This month the Army granted his request, the Sikh Coalition told CNN. The Pentagon public affairs office later confirmed that Kalsi would be allowed to keep his turban, beard and uncut hair.

The civil rights group hailed the move as "a major step toward ending a 23-year-old policy that excludes Sikhs from service."

Kalsi said he was "overjoyed."

"Like the many Sikhs who fought before me, I know I will serve America with honor and excellence," he said in a written statement.

But the Sikh Coalition provided what it said was a copy of the letter from the Army.

Maj. Gen. Gina Farrisee said in the letter that Kalsi's "beard, uncut hair, and turban will be neat and well maintained at all times."

She said her ruling applies only to Kalsi's case, and is not a change of Army policy.

She said the exception could be revoked "due to changed conditions."

Her letter was dated October 22 and released by the Sikh Coalition the next day.

Kalsi is not the only Sikh asking permission to keep his hair, beard and turban while serving in the Army. Capt. Tejdeep Singh Rattan, a dentist, applied at the same time as Kalsi. His case has been deferred until he receives the results of his dental board examinations, the Sikh Coalition told CNN.

Both were scheduled to report for active duty in July.

The Sikh Coalition said Kalsi and Rattan had been assured when they were recruited to join the Army's Health Professions Scholarship that their unshorn hair and turbans "would not be a problem."

"It doesn't make sense to me, especially in these hard times," Kalsi told CNN at the time. "The military is hurting for professionals. They need doctors, they need nurses."

Amardeep Singh, the head of the Sikh Coalition, told CNN in the spring that the issue affects observant Sikhs, not those Sikh-Americans who entered the military after removing their turbans and shaving their beards and hair.

The issue is important for the roughly 500,000-strong American Sikh community, Singh said.

Sikhs faced hostility after the September 11, 2001, attacks, when people associated them with al Qaeda terrorists because their turbans and beards resembled the militants' appearance. The Sikh religion was founded in India.

"The perception is still there," Singh said. "We're sort of still feeling it."

He said surveys chronicle the problems Sikhs face. Among them is one conducted in the Queens borough of New York City recently in which children reported being on the receiving end of verbal and physical abuse, he said.

CNN's Joe Sterling in Atlanta, Georgia, contributed to this report.